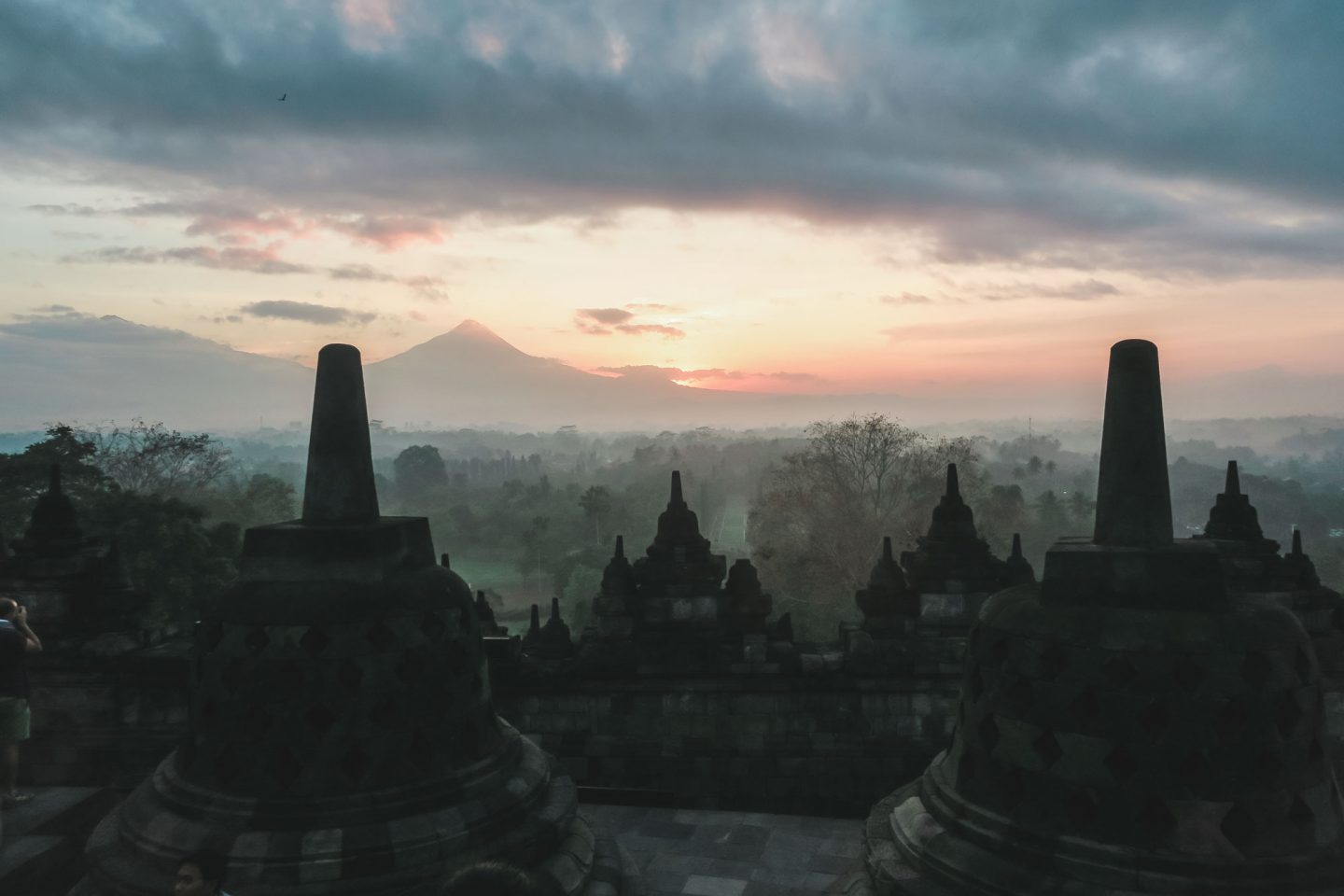 Indonesia is the 4th largest populated country on earth, and Java is home to half of it’s population. It’s a long, thin island, dotted with volcanos and temples. It’s the cultural and economic heart of Indonesia, with a history stretching back as far as mankind. Homo Erectus is nicknamed “Java Man”, with Hindu and Buddhist empires appearing in the 7th century. It’s a rich country, with plenty to offer the curious traveller.

Why people go to Java

Java is an island for those who love culture and history. While it might lack white sand beaches and resorts, it makes up for it in ancient temples, traditional culture and the odd volcano or three. Jakarta is the capital of Java, and is seen as the financial hub of the country. It’s probably visited by more business people than tourists, but it’s an easy entry into the country. From here you can head east towards Krakatoa and some of the only remaining virgin rainforest on the island, home to the elusive black rhino. Yogyakarta on the other hand is really the cultural capital of the island, with a lot of history and sights to explore. This is the main stop for tourists, with a much gentler vibe to it than Jakarta. From here you can visit the famous Borobudur Temple, as well as climb Mt Bromo and visit the Ijen crater with it’s blue lava flames. 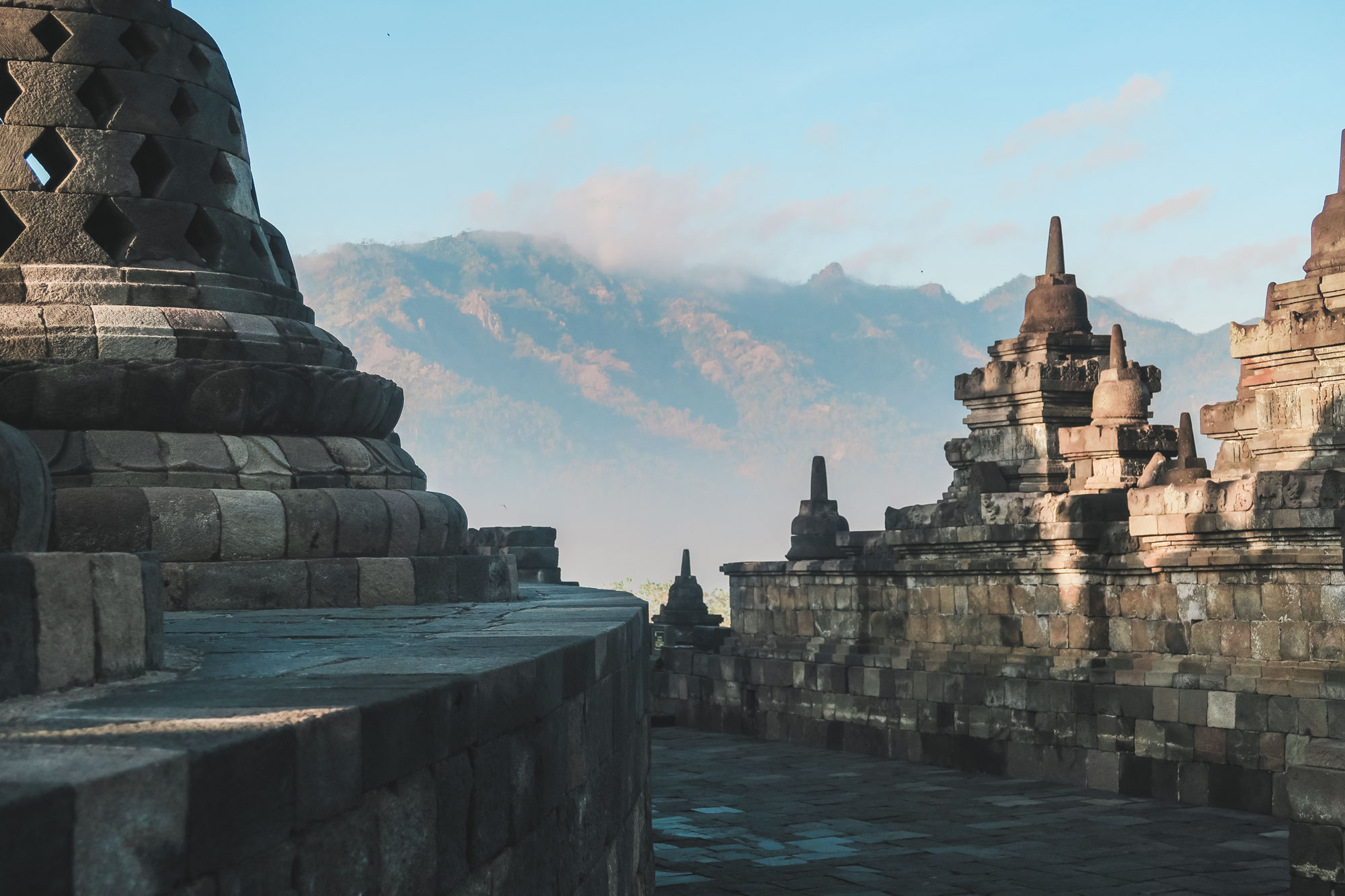 We began in Jakarta, spending a couple of days here to acclimatise. We then took the 8.5 hour train across country to Yogyakarta. We found Executive Class seats for about £15 each on www.tiket.com, and left from Gambir Station at 8.30am, arriving in Yogya late afternoon. It was an easy train journey, with only a couple of stops the entire trip. The coach was air conditioned, the seats had plenty of leg room, and everything ran on time. 10/10! 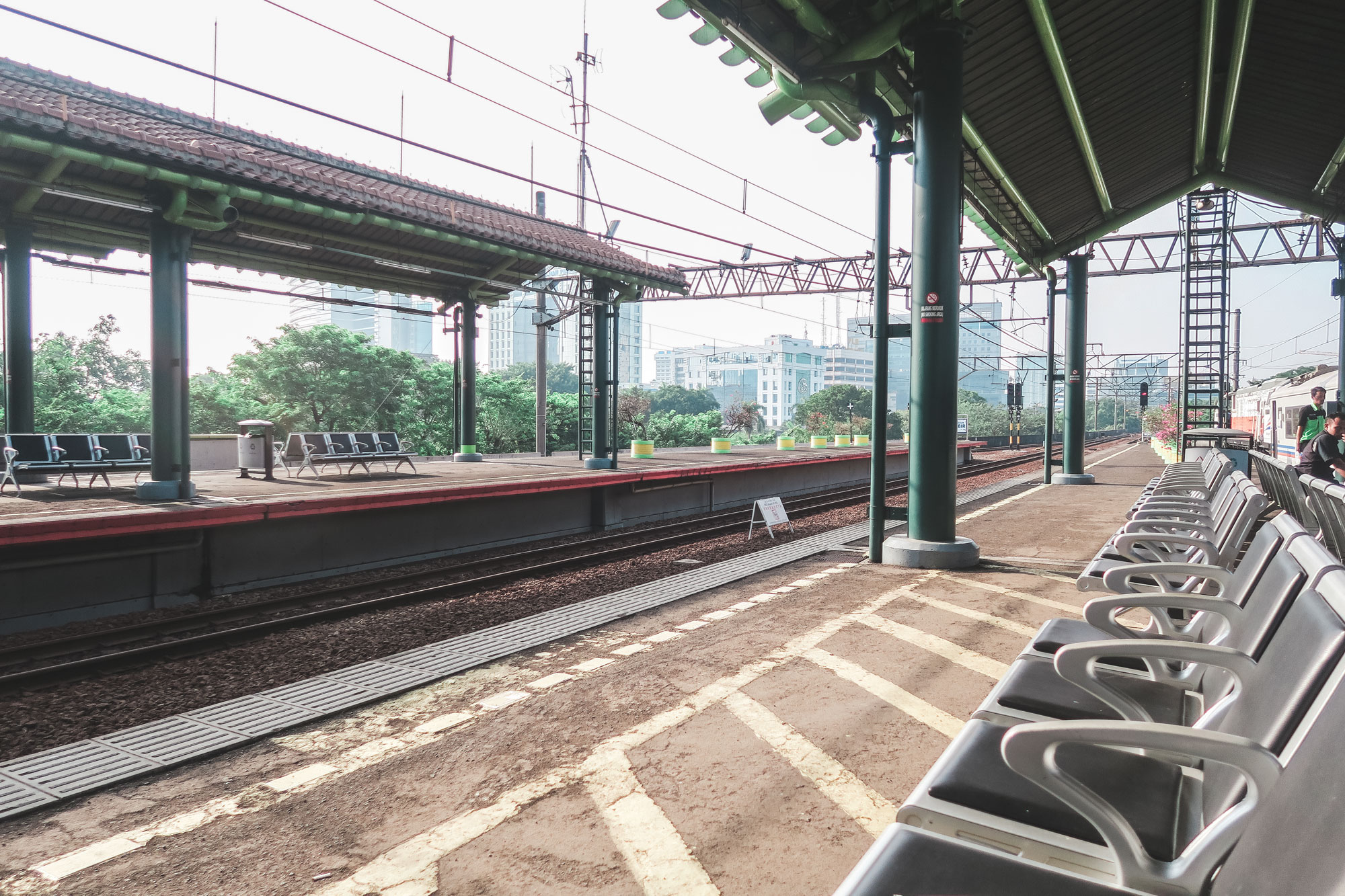 Java is a lot busier than I had imagined. Jakarta in particular. Roads were all but impossible to cross, and a 2 mile trip in a taxi took us 1.5 hours! Despite this, I also felt completely safe here. I’ve found Java to be incredibly warm and welcoming, and easy to navigate. The heat is another one of the first things that hits you, especially the humidity.

Java has a very long and rich culture, with Hindu, Buddhist and Muslim influences. Today, Java is predominantly Muslim, and the call to prayer can be heard everywhere. It was within ear shot of both our stays. Many women wear headscarves, and the dress is more conservative to what you might expect. The Indonesian people are very polite and you’ll never get called out for dressing a certain way, but I always felt better with at least my legs or my arms covered. It always sounds a cliche to say that the local people are friendly, but in Java it really is true. They are incredibly polite, laid back and happy. There was very little hassle on the street, there were very, very few hawkers and I always felt completely safe, even down quiet, dark backstreets. 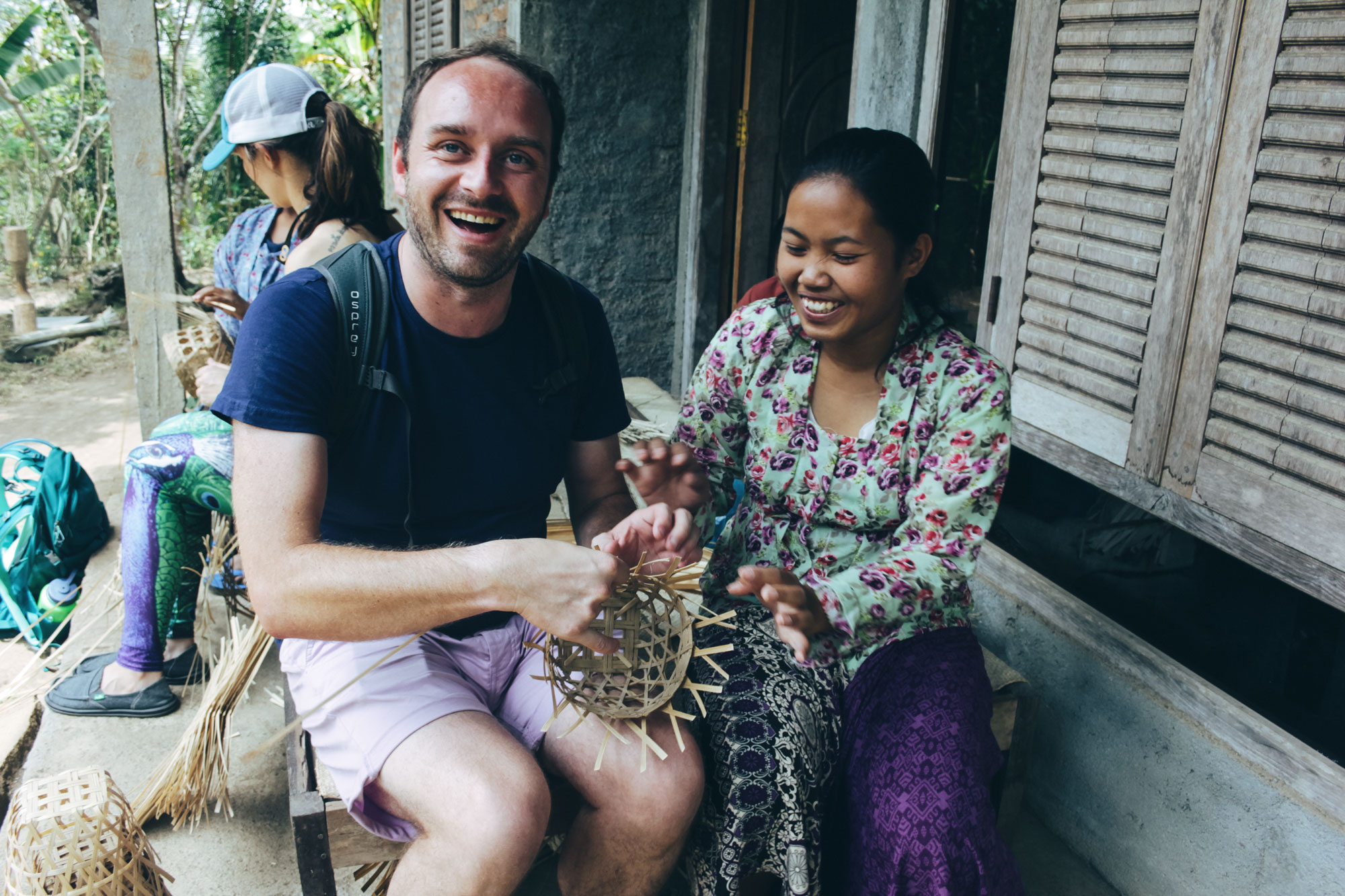 Some famous Indonesian dishes include Nasi Goreng (fried rice, chicken, fried egg), Cap Cay (stir fried veggies) and Ayam Bakar (charcoal grilled chicken). I don’t eat meat or dairy, and it’s pretty hard to be 100% vegan here. Tofu and tempe are everywhere though, so you can nearly always get by.

Street food is a big deal in Java, but we avoided it for one reason – the dog meat trade. I had underestimated how much of an issue this was in Indonesia, and Java is no exception. We saw no stray dogs throughout our stay. Some places openly sold dog meat, others were perhaps more secretive. Ben didn’t really want to accidentally eat dog meat, so we stuck to restaurants and local Warungs (locally run eateries). However, he did enjoy eating coconut sugar fudge, in all the colours imaginable. 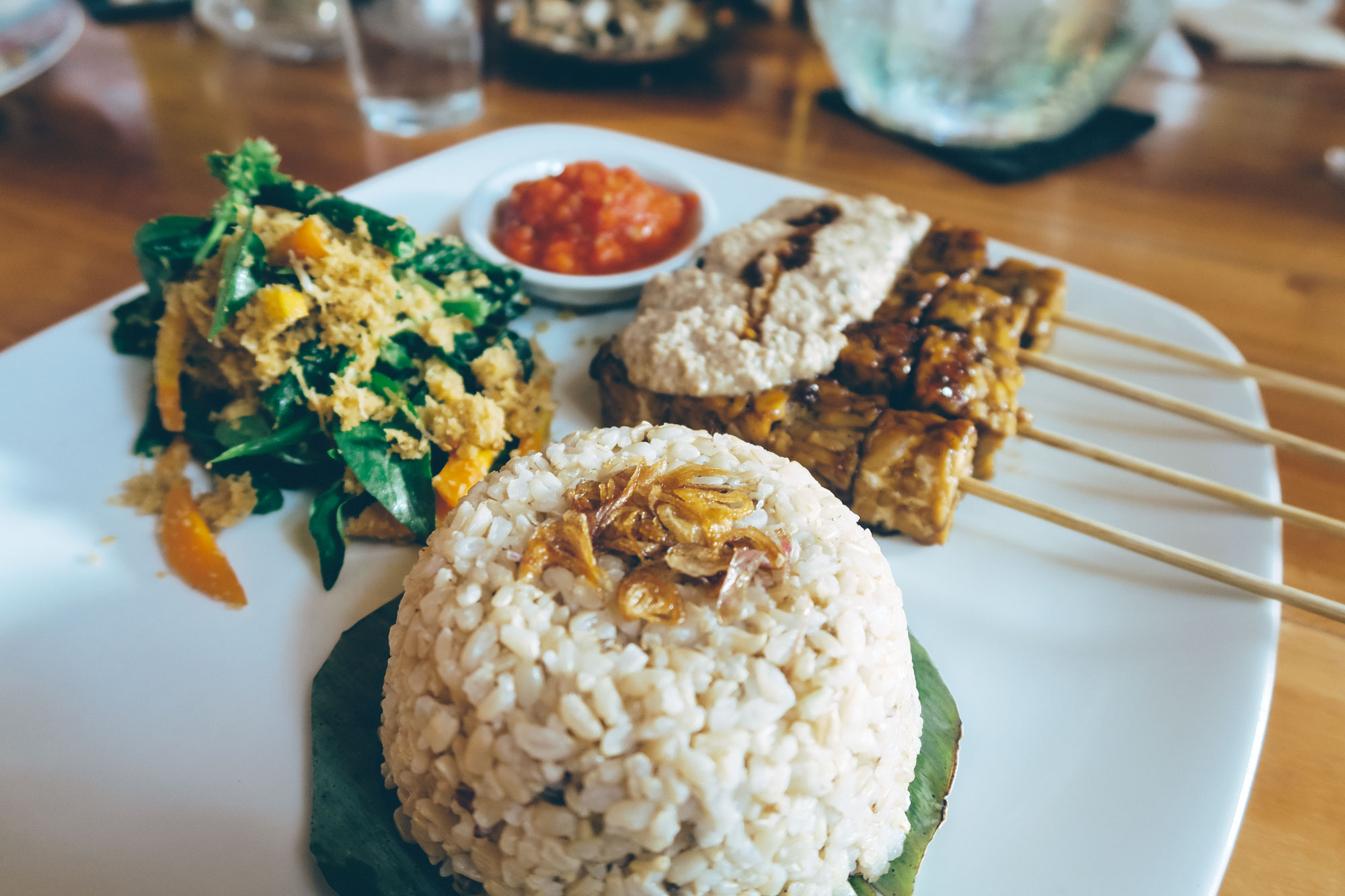 We stayed in big cities and towns, meaning we didn’t really get to experience any wildlife at all. There was a shy little gecko that lived in our bathroom, but that was about everything we saw. There were no big bugs, no spiders, nothing. Java is very highly populated, and I’m pretty sure there aren’t many places left that are famed for their wildlife. I mentioned this above, but there is a region of rainforest in the south west corner of Java that is home to the rare black rhino, as well as all sorts of jungle critters. I’d love to go there at some point.

A beautiful boutique hotel that had everything we needed and more during our quick two night stay in Jakarta. The rooms were small but beautifully designed, with a huge shower/wet room for a bathroom. We had robes and slippers, as well as a complimentary breakfast. The decor was modern and fresh, with lots of green plants and geometric finishes. The restaurant served amazing food, and I haven’t even mentioned the rooftop bar! Oh that bar! The climbing plants and bushes gave it a jungle vibe, with candles on the tables and fairy lights strung up. Serving tapas and drinks, there isn’t a better way to look out over the Jakarta skyline and watch the sun go down, Bintang in hand.

Cost per night with Breakfast – £65 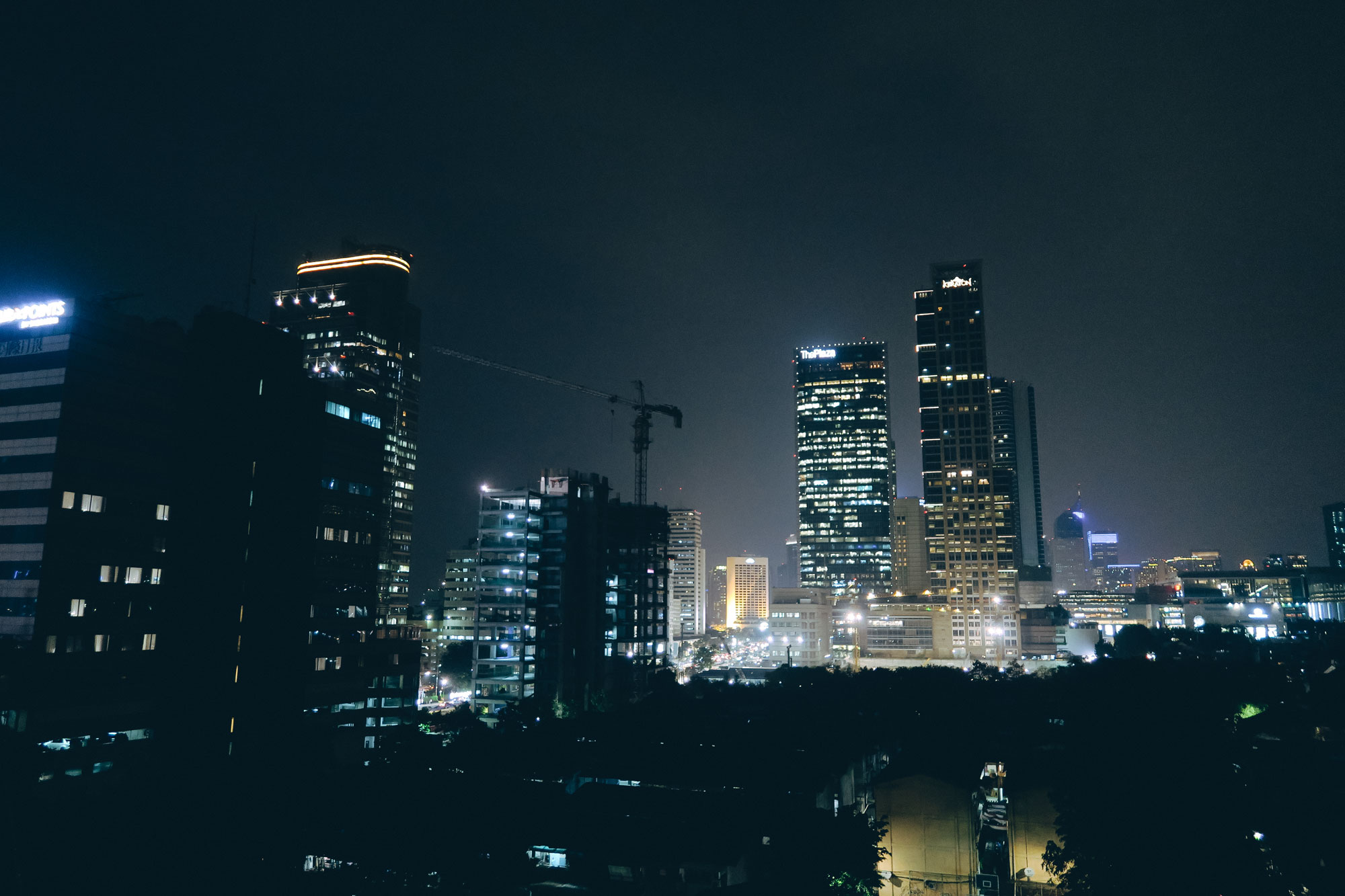 This is a small and basic homestay that served as our base for two weeks. It’s in a quiet neighbourhood, ideally located for walking to the main parts of town, without being so close that it’s noisy. We were lucky that we had the place to ourselves, which meant we could work in the communal lounge area quite happily without disturbing anyone. We had a large room at the back of the house, with a big bed and a fan. No air conditioning though, which can be painful as the humidity is very, very high. But the bathroom was clean and we got breakfast everyday. Our host, Delima, was amazing at organising trips for us and making sure we had transport. She took a lot off our minds which meant we could concentrate on enjoying ourselves.

Cost per night with Breakfast – £7 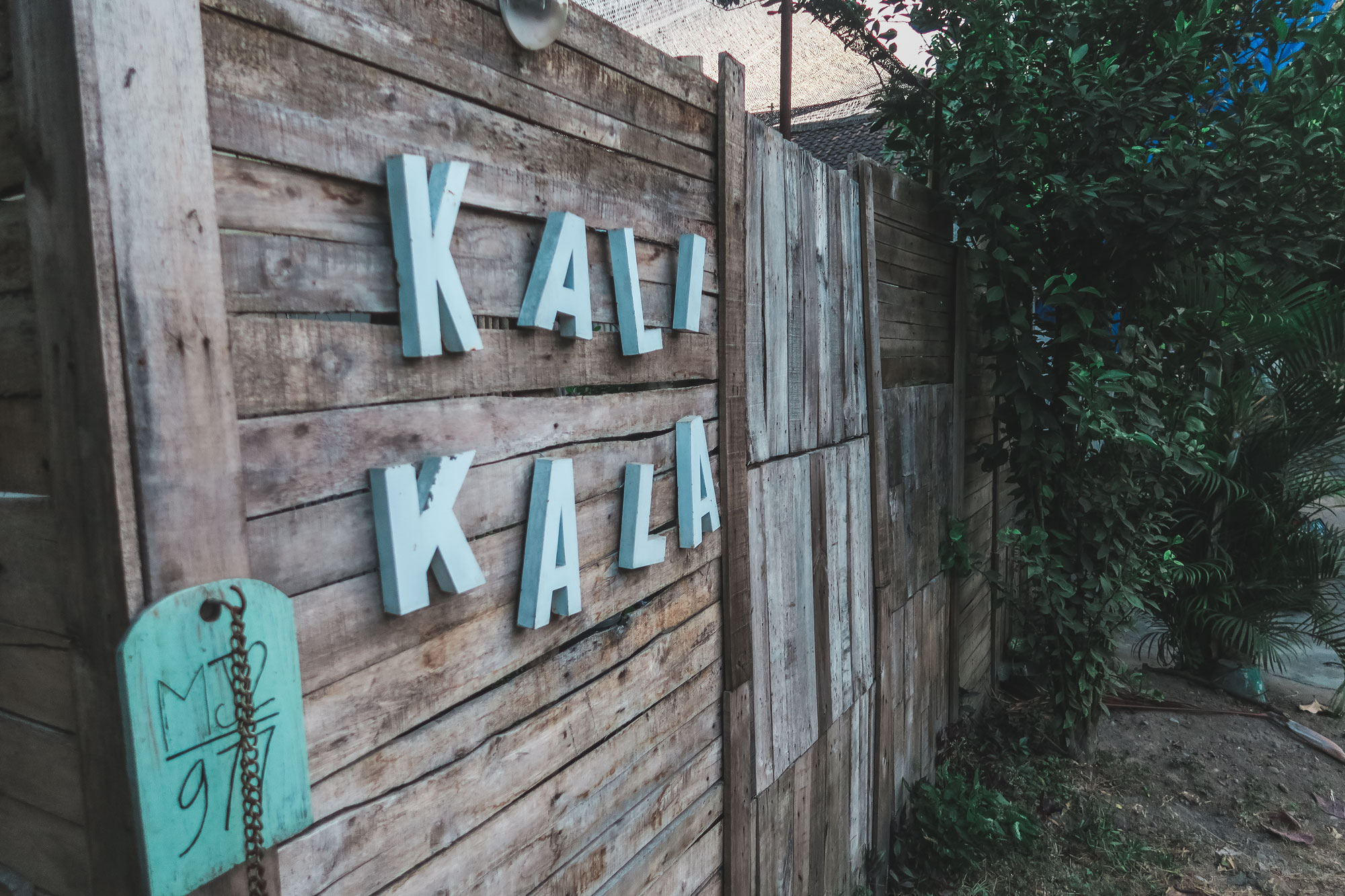 There are plenty of places to go and eat in Java, and many won’t have a website, but here are some of our favourites:

This is such a cheat, as it’s a restaurant heavily inspired by western food, but I had to include it as it was some of the best food we had, and sometimes you really just want a taste of home. The food here is really high quality, with a range of Italian inspired food and Indonesian options. We loved the garlic focaccia, and my pesto linguine was so fresh and delicious. The chips here were on another level, hand cut and fried and oh-so-crispy.

Even if the food here was bad, the location would more than make up for it. It’s tucked away in a magical garden, with tall trees, bamboo huts and a water fountain. It was the perfect place to sit and watch the setting sun stream through the canopy. The food is vegetarian, with lots of vegan options. I had the tempe satay, while Ben had the tempe burger. Both were amazing and I’d highly recommend eating here, even if you’re a hardened meat lover. 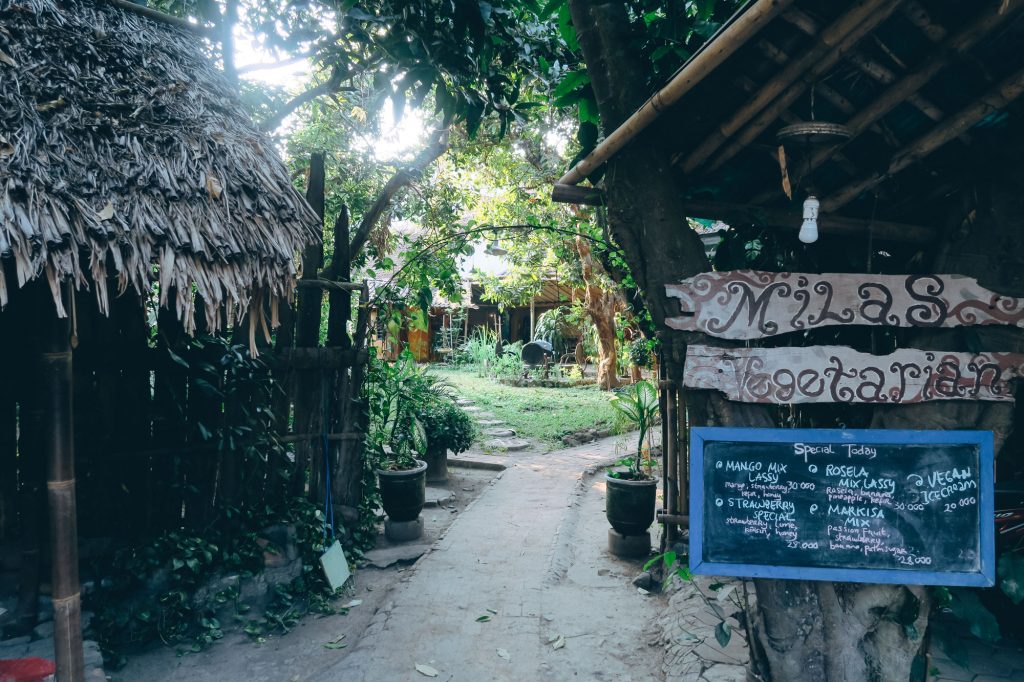 This is one of the only fully vegan restaurants that I heard of, and it was recommended by our host Delima. This food was better than Milas in my opinion, and was so ridiculously tasty. It’s situated on a quiet but popular street, lined with bars and tour companies and hotels. I had the tempe burger and Ben had the tempe steak. It was one of the best burgers I’ve ever had! The guacamole was out of this world.

There was a lot we wanted to do in Java, and most of them involve being on a tour of some kind. Whether it’s getting transport there or hiring a guide, you’ll have to pay someone to take you. Public transport isn’t geared up to the main sights, and driving on your own would be an incredibly brave (or foolish) thing to do – the traffic is some of the worst I’ve ever seen! Needing to arrange transport for everything you want to see/do can get expensive and tiring, so we just did what we felt like.

We made sure we saw Prambanan Temple at sunset and Borobudur Temple at sunrise – two of the big draws to this area. We also arranged transport to take us tubing at Pindul Cave and then onto Sri Gethuk waterfall, as we were craving some fresh air and cool water. We really wanted to do Mt Bromo and the Ijen crater, but time just wasn’t on our side.

I’d highly, highly recommend using Kaleidoscope Of Java Tours if you’re considering Borobudur. For the same price as many crammed coaches, you get an absolutely amazing experience. You get picked up in a private car, and taken to the temple. After the sunrise, you’re given a history of the temple and get to learn about Buddha’s life through the reliefs carved into the wall. Then you’ll have breakfast, before going to an active Buddhist monastery for half an hour. Then you go for lunch, which is included, before making your way to a traditional Javan village to eat, drink and learn about how they live day to day. All in groups of no more than 6, and for the same price most tour operators charge to the temple and back. You’d be silly not to! 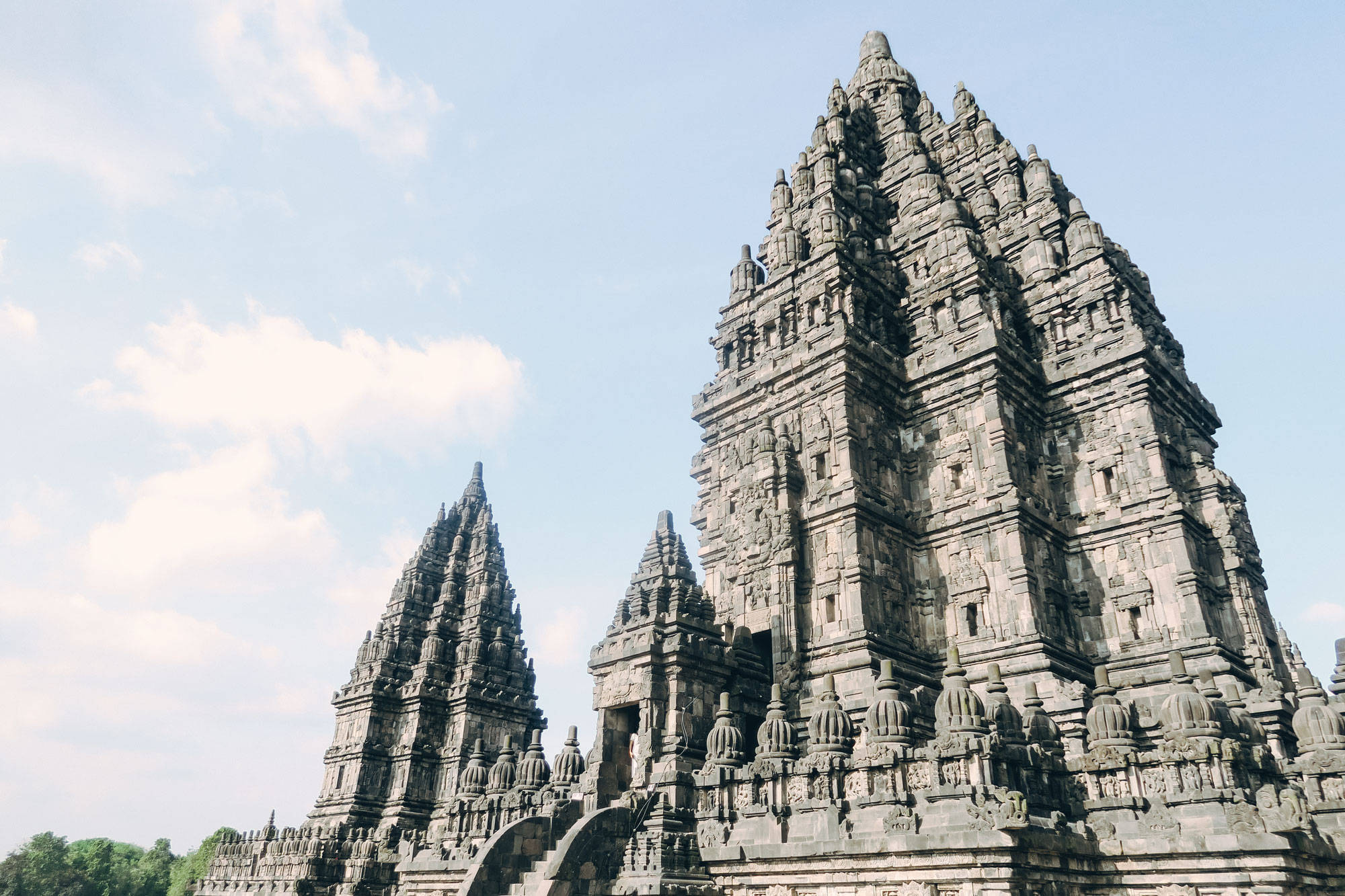 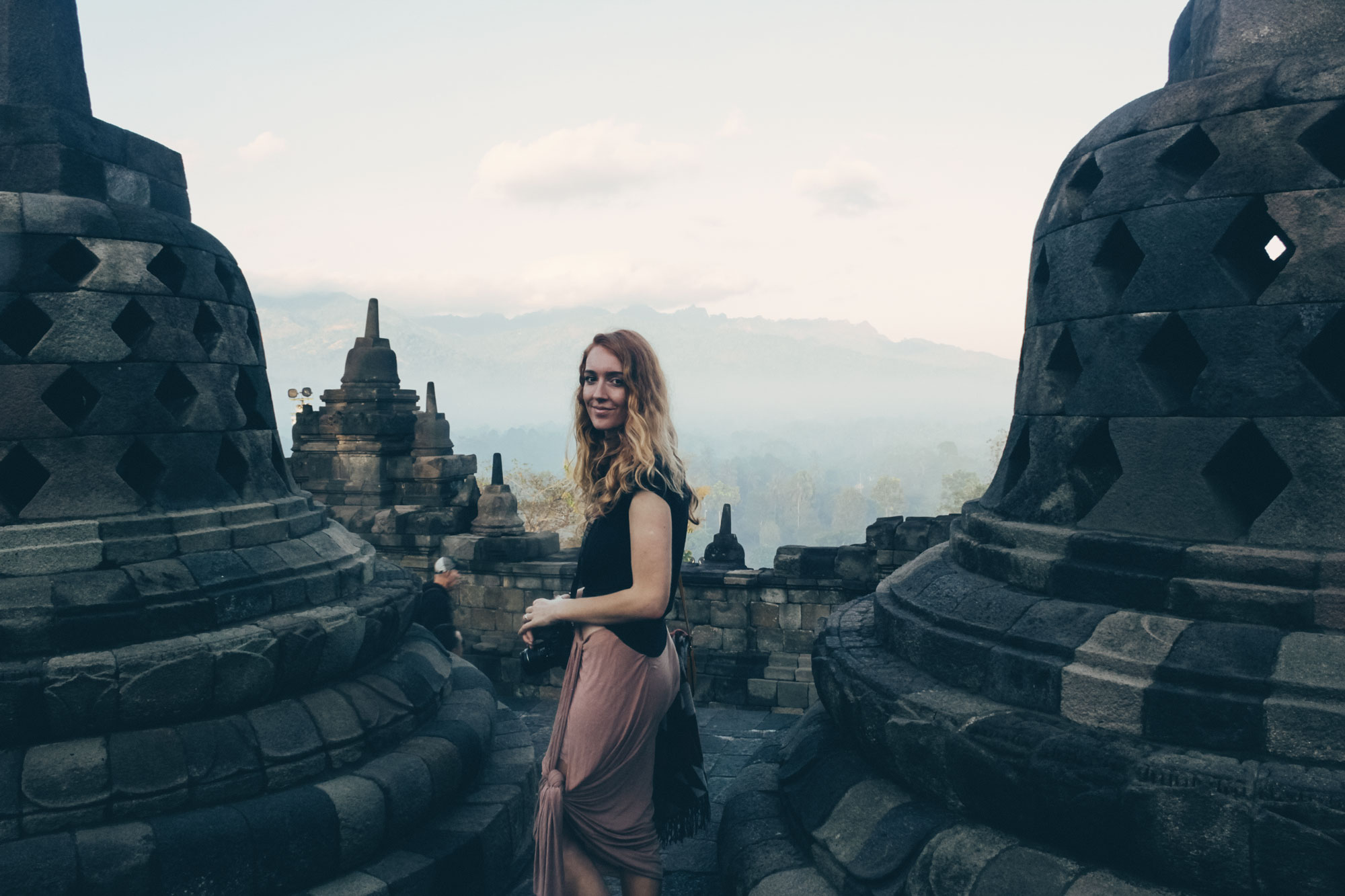 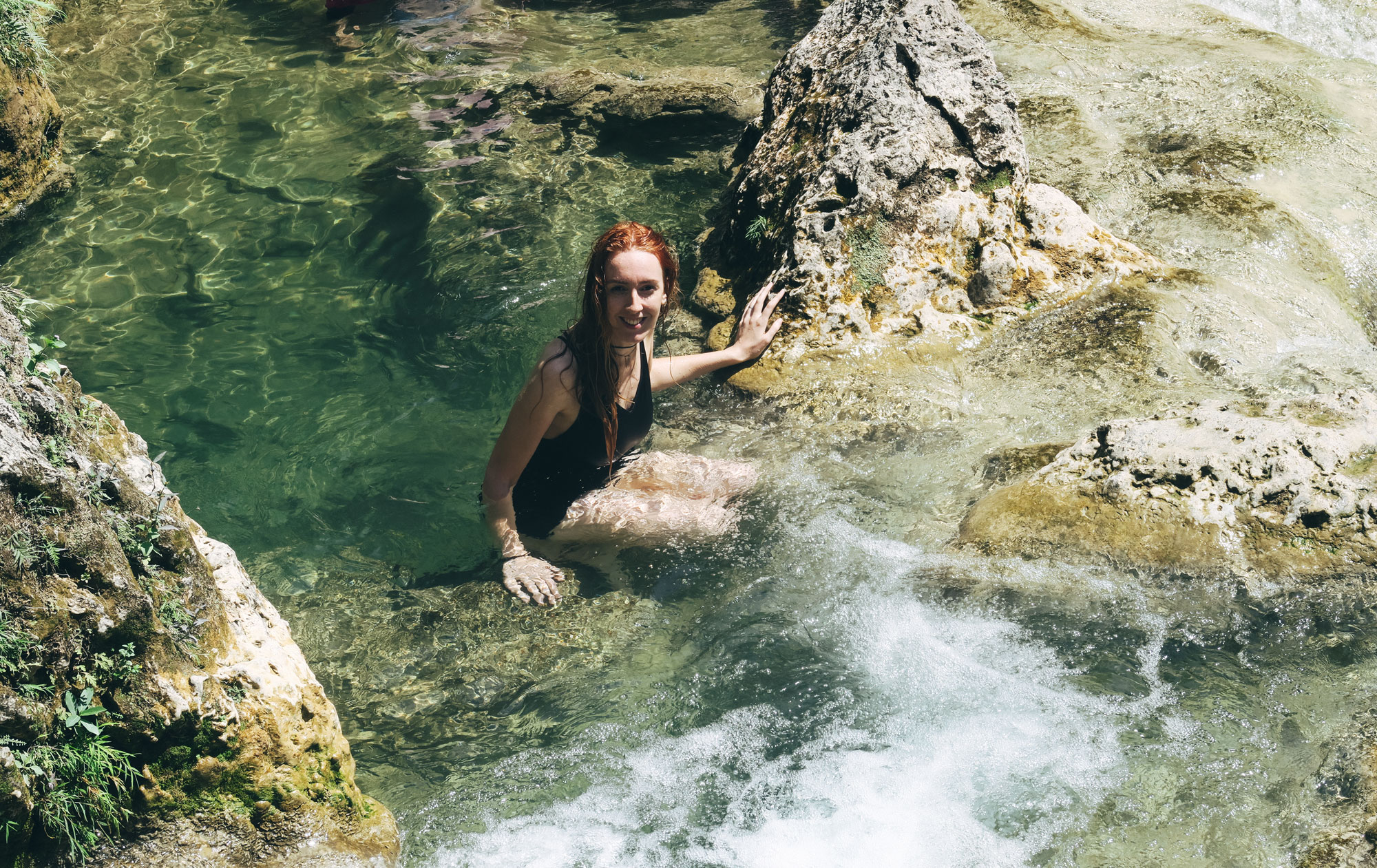