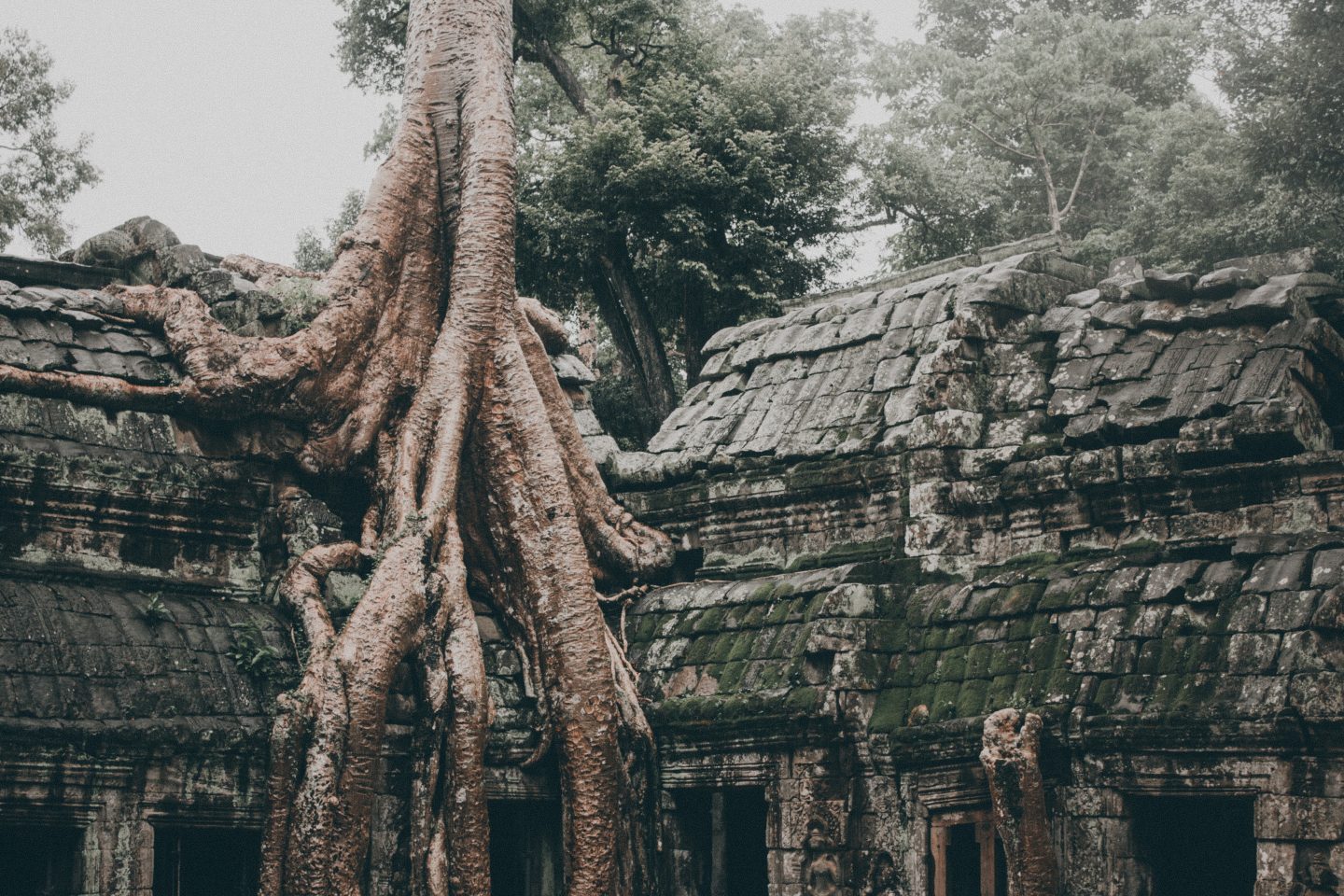 It’s about time I start catching up on this blog. I’ve been focusing so much on documenting this trip by video that I’ve neglected this space a little. These photos were taken on our first trip to Angkor Wat, an ancient temple complex in Cambodia that was a contender for the new 7 wonders of the world. It’s notorious for getting more than a little crowded here, so we ended up visiting over a period of 7 days, giving ourselves ample time to soak up the history and avoid the busiest spots.

As soon as our Tuk Tuk pulled out of the first ticket checkpoint, the heavens opened. The more superstitious might argue that the Gods didn’t want us – or anyone else – wandering around the temples today. Visibility disappeared to a few feet and the paths turned into streams. This turned Angkor Wat into an atmospheric and eerie place to be, and I wasn’t complaining! Built in the early 12th century by the Khmer King Suryavarman II, it was dedicated to the Hindu God Vishnu. In fact, the temple itself was designed to be a microcosm of the universe, captured in carvings and stone. It took only 39 years to build, at a time when Europe was in the dark ages. Such is the grandeur and complexity of Angkor Wat, that when it was rediscovered in the 1700s, it was not believed to have been created by the Khmer people. Little did they know, but Angkor Wat was once the largest city in the world, housing over a million people when London was home to only 200,000.

Over time, through political and religious turmoil, Angkor Wat changed from Hindu to Buddhist to Hindu again, now being used as a Buddhist temple. It seems Angkor Wat never was truly abandoned, but when it was found by Western explorers in the 19th century, most of the complex had been reclaimed by jungle. Imagine stumbling across these temples in thick jungle, not knowing you’re standing on the footprint of a great civilisation! The mind boggles.

The first temple we visited was the lesser visited Ta Nei Temple. This has that ‘hidden temple in the jungle’ feel that we all want to experience. It can only be accessed by motorbike or Tuk Tuk, so thankfully no tour buses can really visit here. As we were here first thing in the morning, we also had the place to ourselves. Trees have reclaimed much of the temple, but the carvings and engravings can still be seen everywhere you look. The rain pitter pattering through the canopy only added to the peacefulness and quiet of this place. It was really beautiful here. 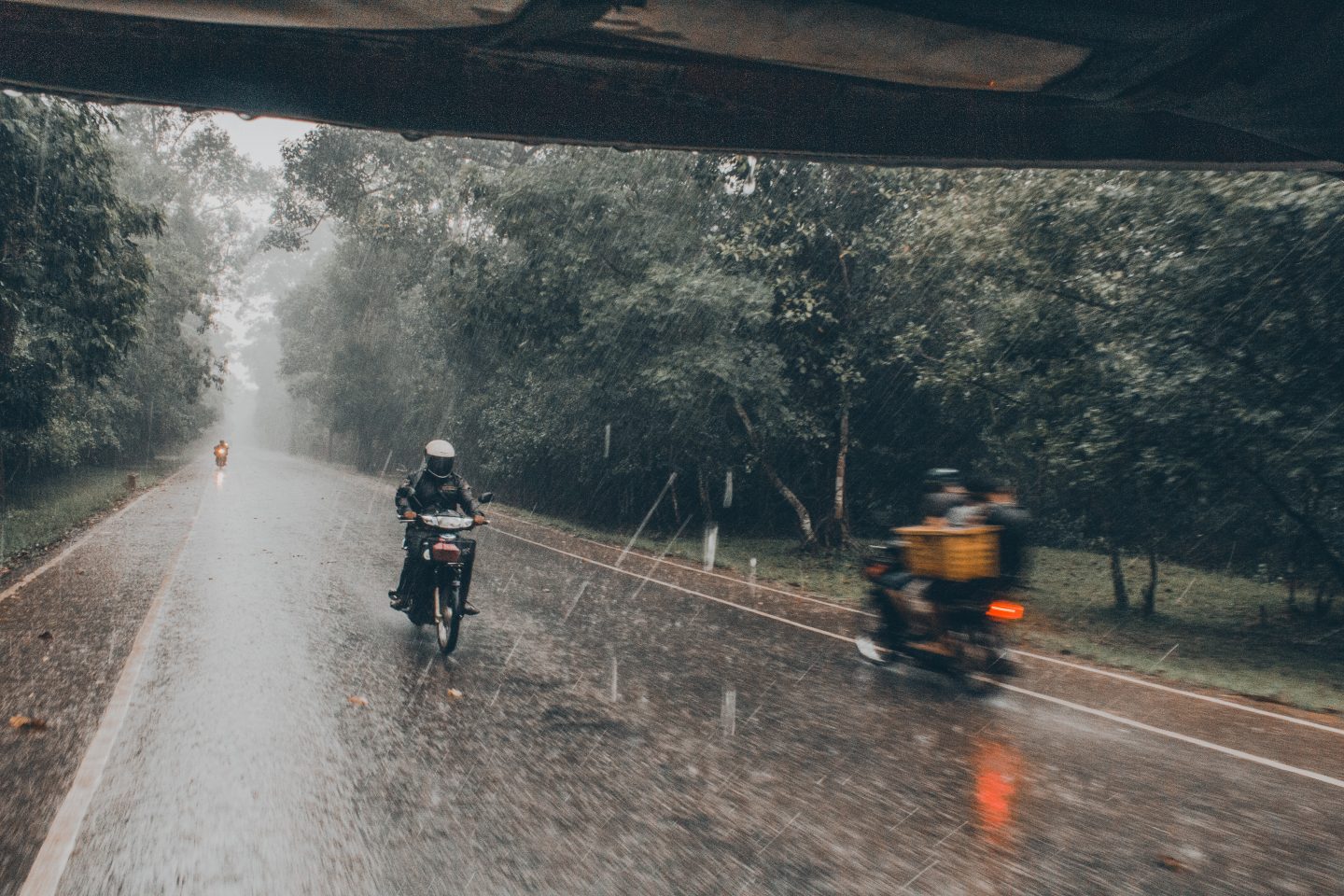 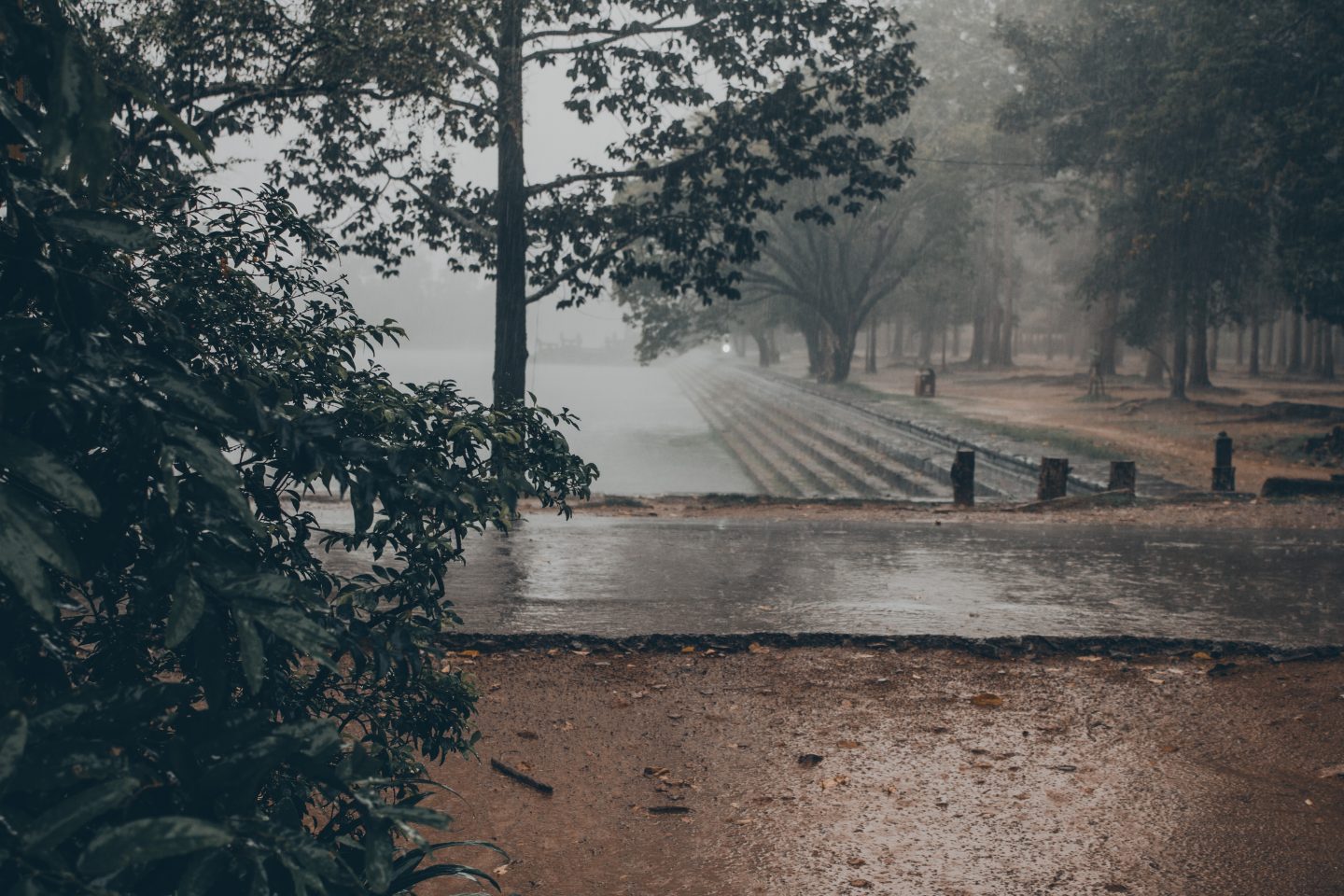 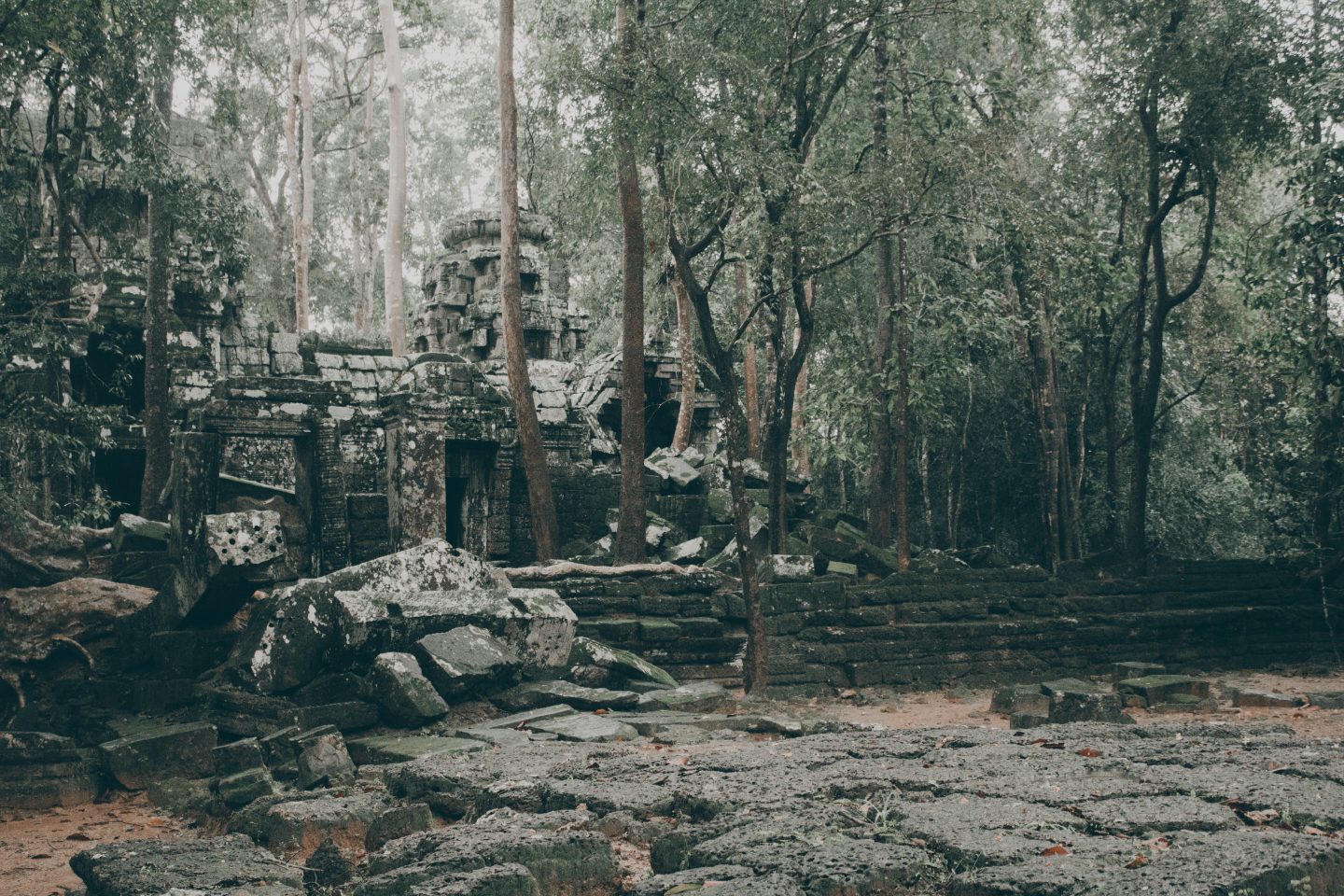 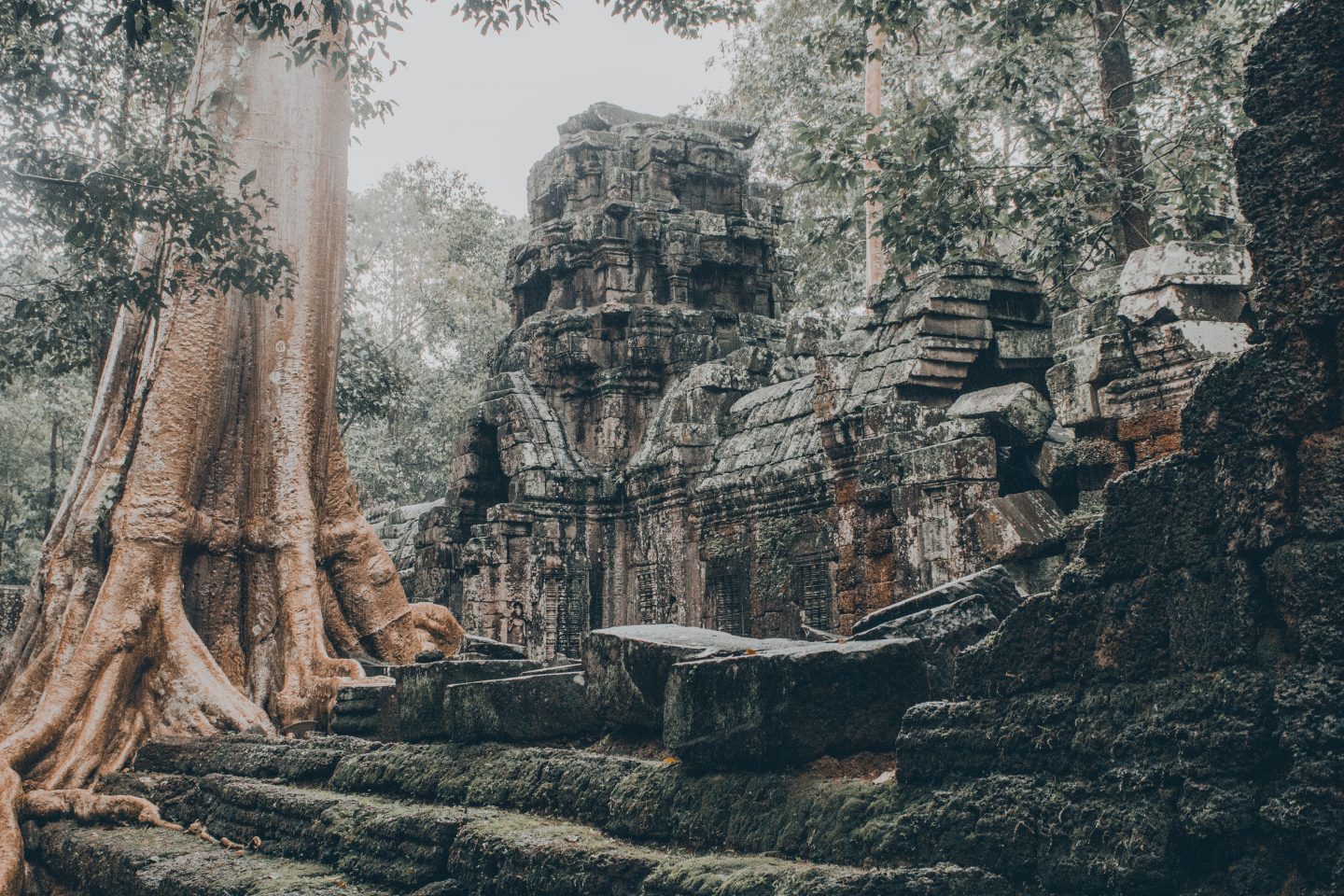 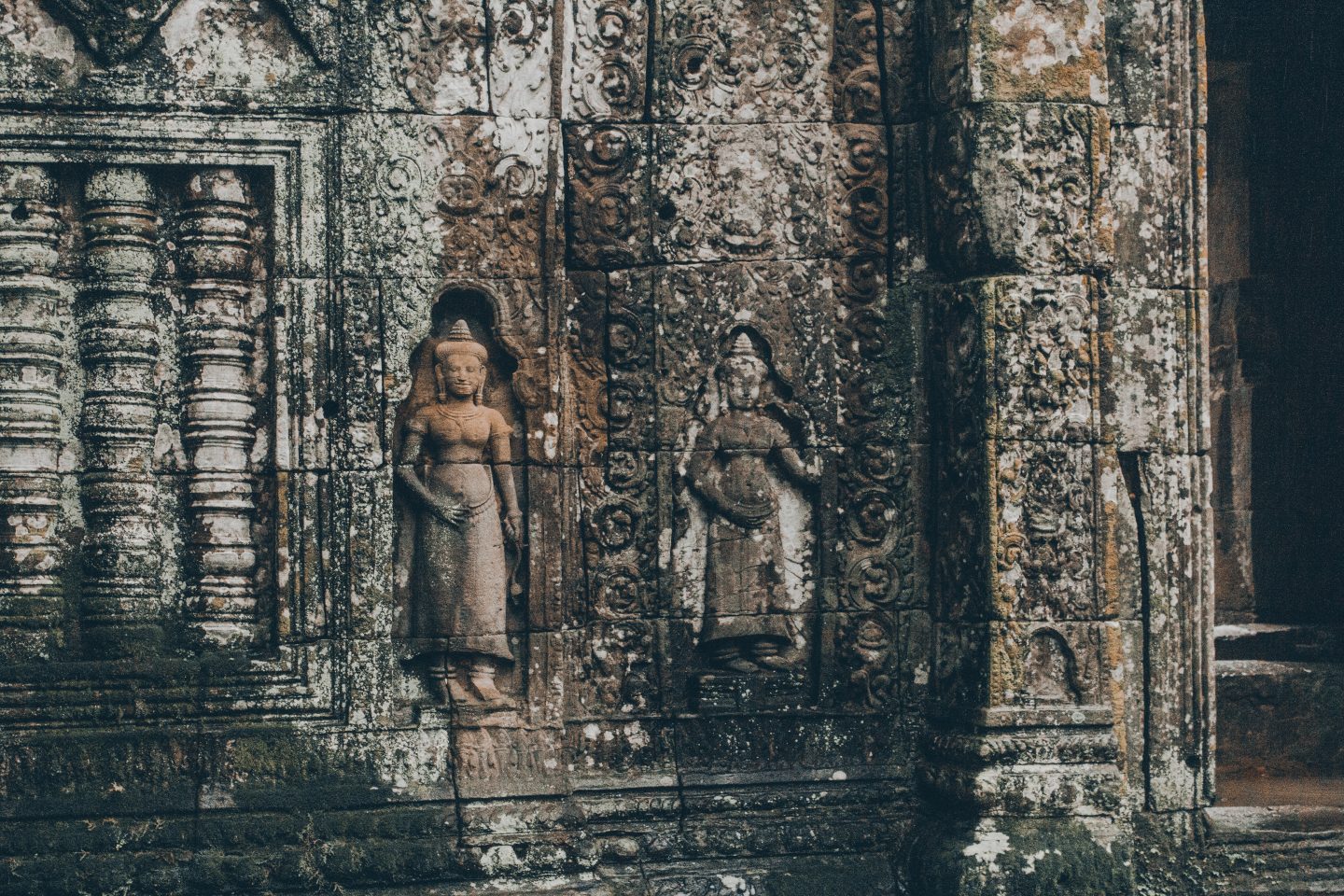 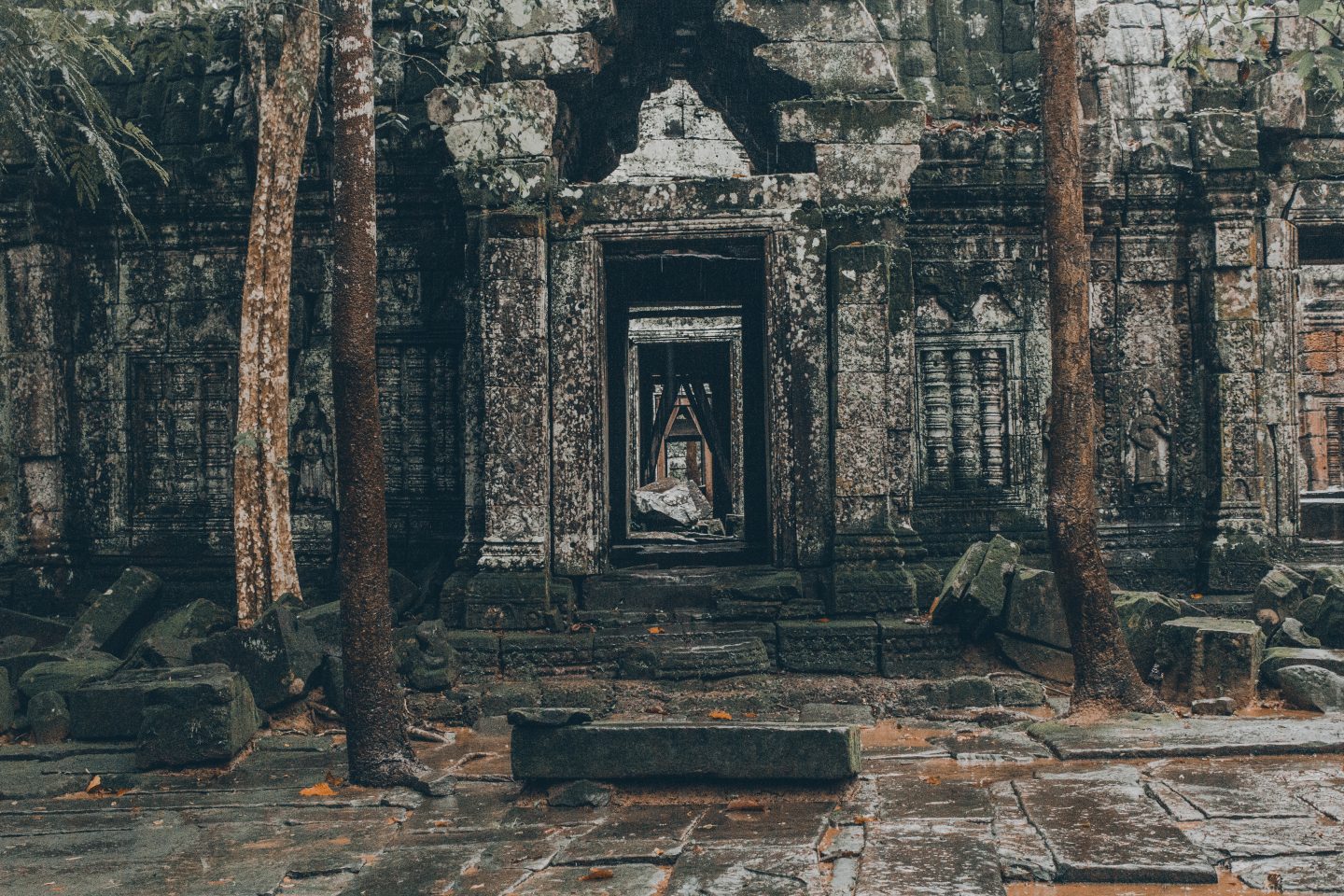 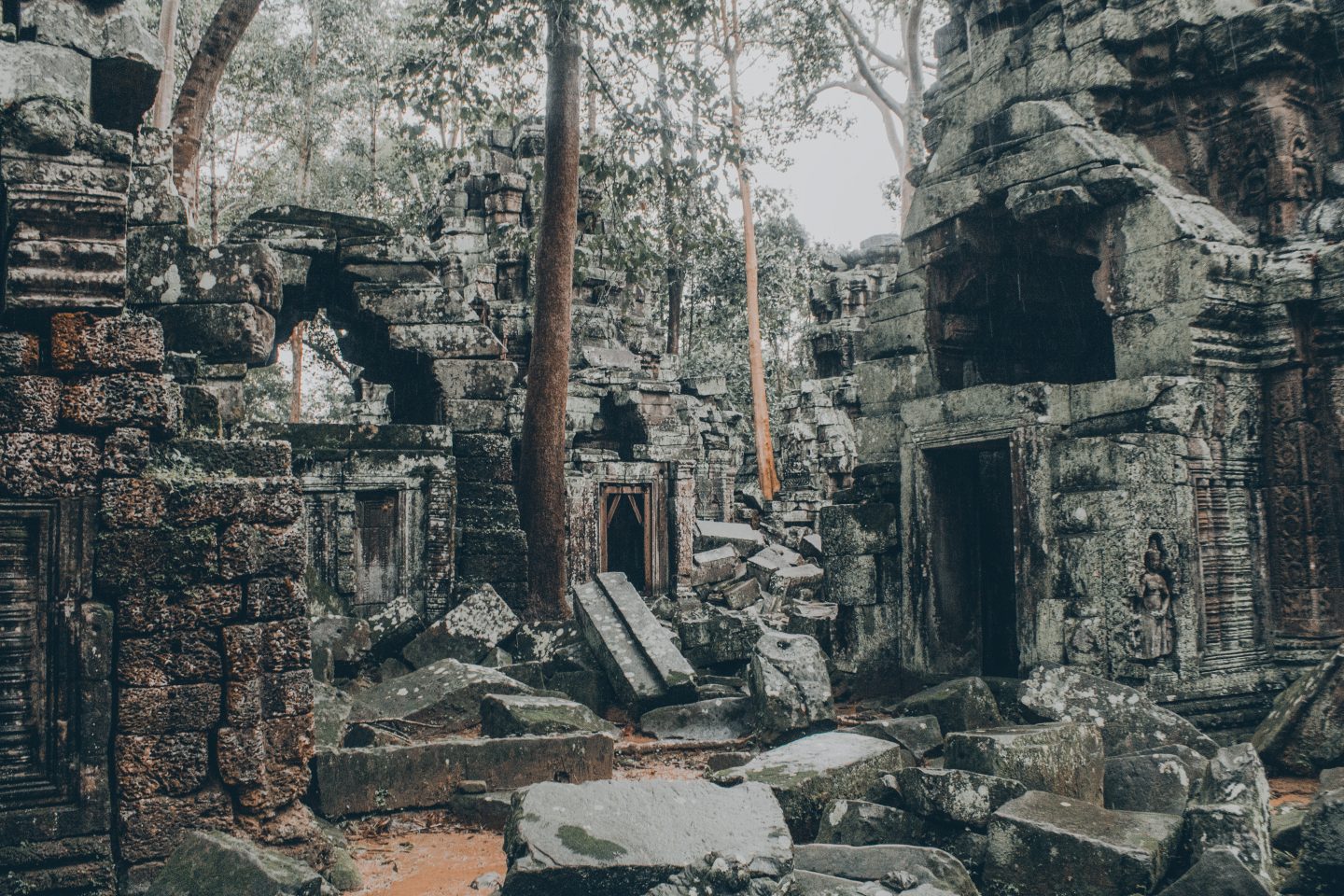 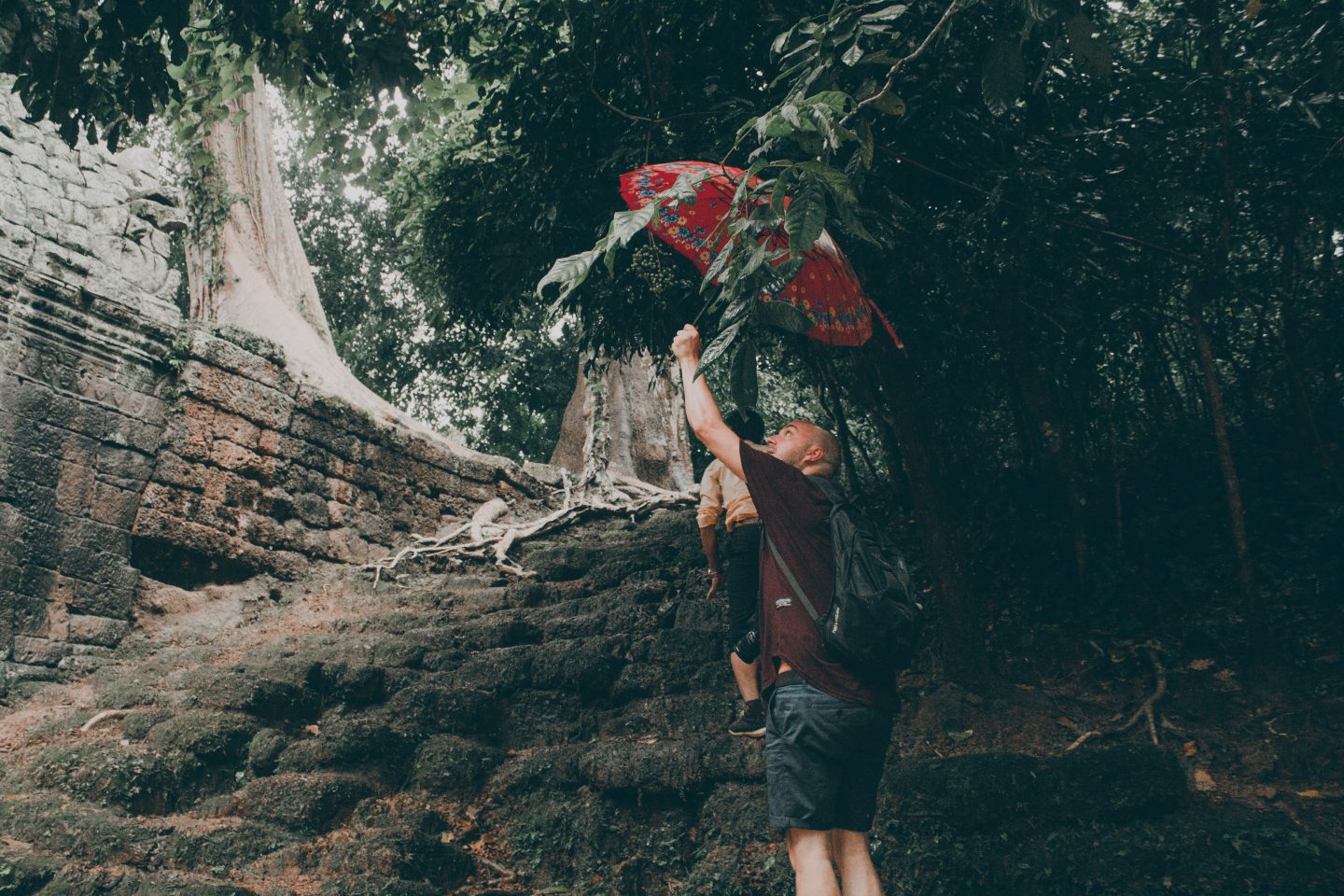 The next temple was the impressive Bayon Temple, the centre of a larger temple complex called Angkor Thom. Yes, this was still within Angkor Wat and yes, it can get pretty confusing. Still, this temple is famous for the many giant Buddha faces that stare down at you from the heavens. It also has beautiful bas-reliefs carved onto the walls that depict daily life during the Khmer Empire. The walkways here are a maze, and you could lose yourself wandering through into the different towers and galleries. Being very central, this temple was pretty crowded and busy. 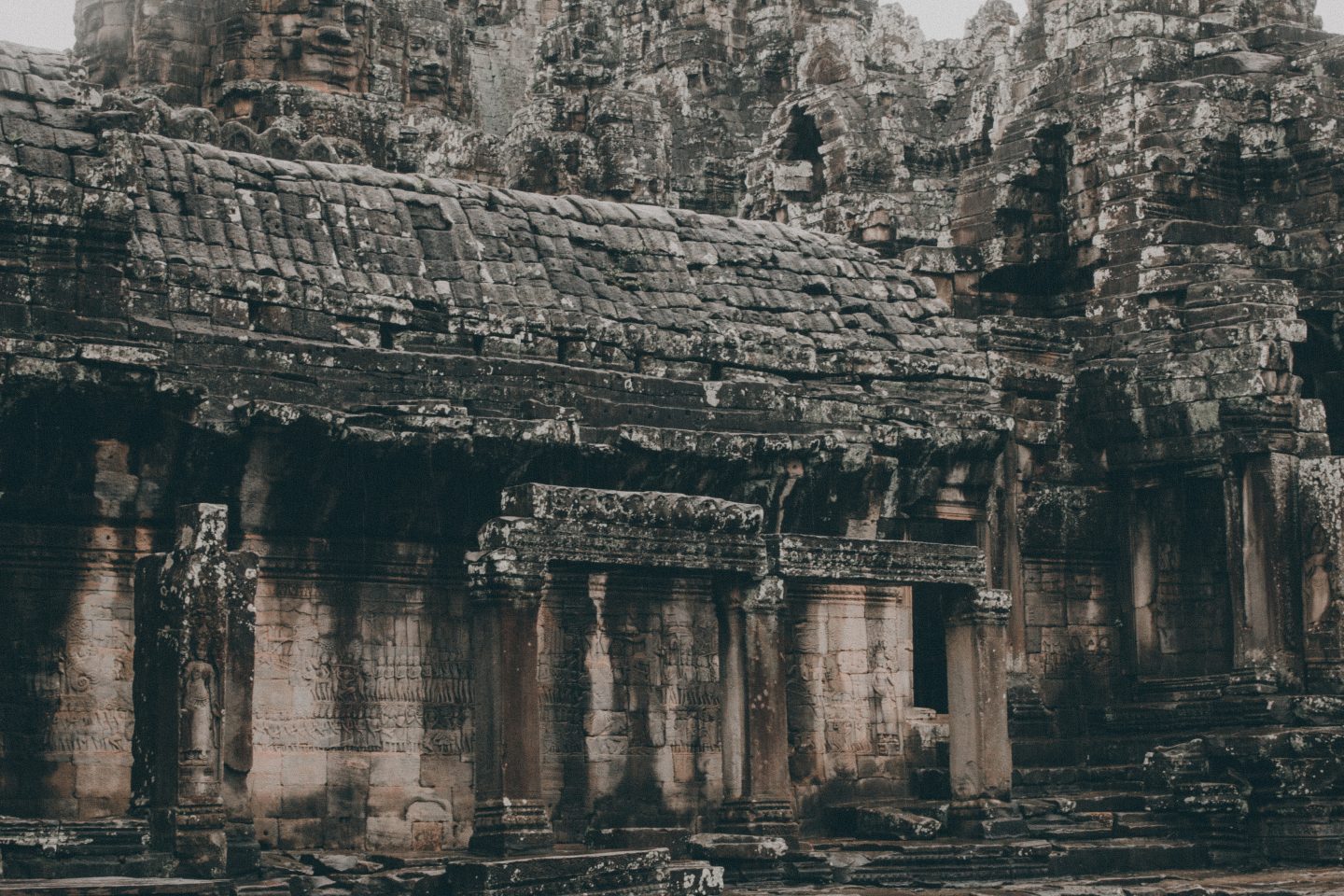 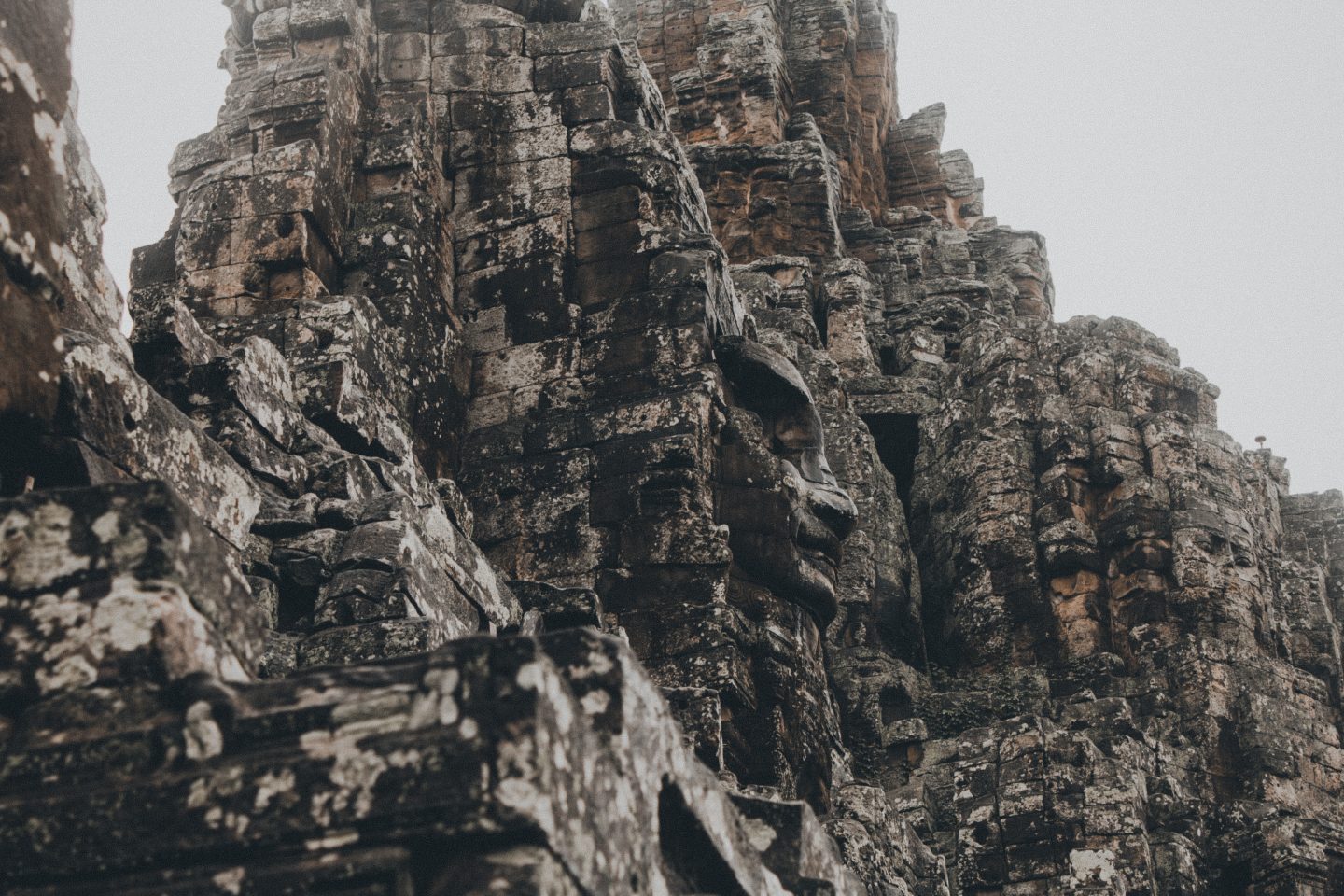 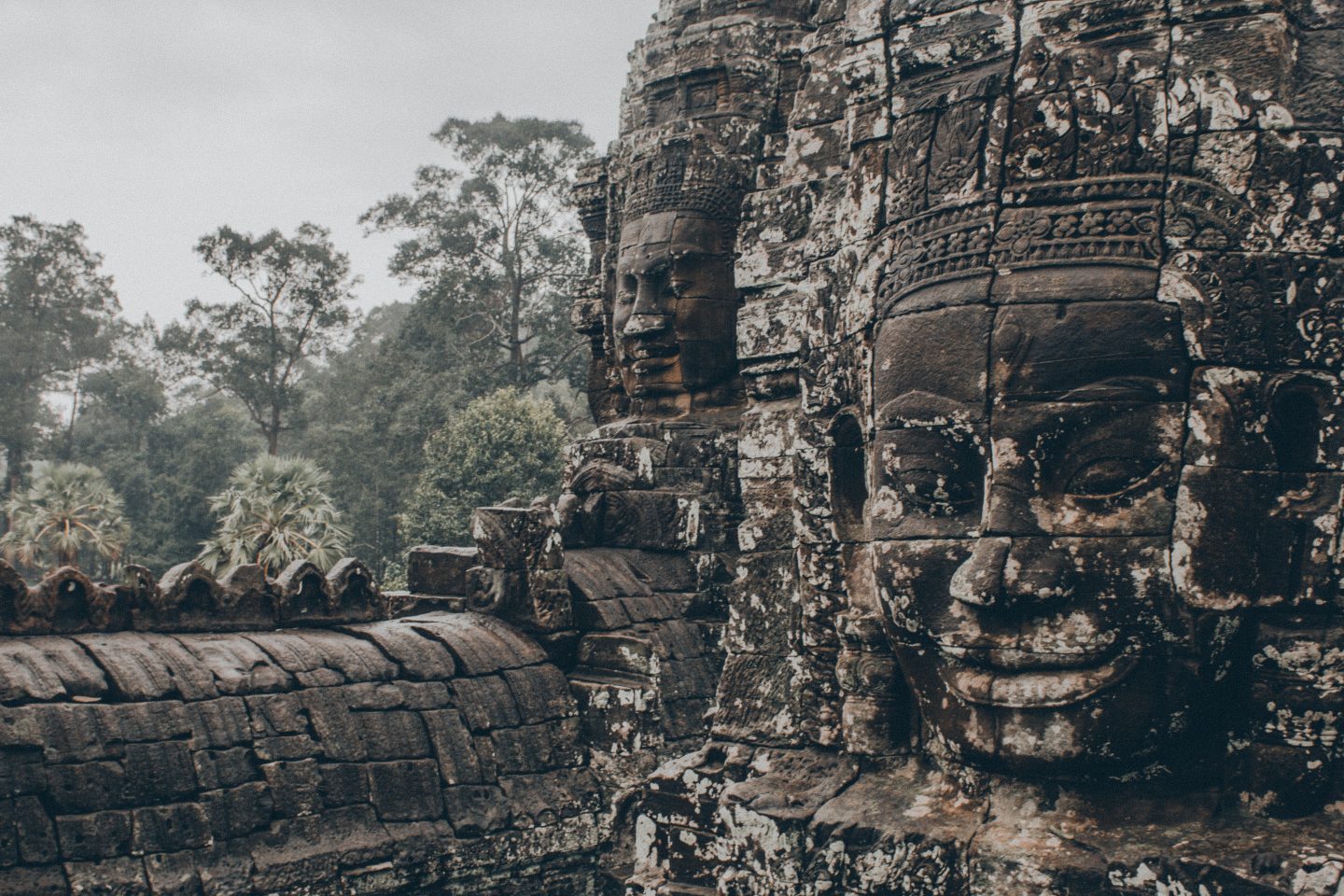 After lunch, the final temple we visited was the infamous Ta Phrom Temple, made famous by the Tomb Raider film with Angelina Jolie. Strangler fig trees have taken over the walls and towers, as though it’s being reclaimed by the jungle again. It was very, very busy here, but still incredibly beautiful. There was a spaciousness here that I didn’t find in the other temples, and no crowds could take away the otherworldly feel that the rainy afternoon gave this place. I was particularly interested in finding a little carving of the ‘Cambodian Dinosaur’ – a small etching that looks like a stegosaurus. It would have been carved at a time when humans wouldn’t discover dinosaur bones for centuries, unless of course, some other version of history happened… Our guide was pretty convincing that this was in fact just a wild boar, and looking at other carvings, it did look like other animal drawings with leaves behind it. I’ll let you decide for yourself though 😉 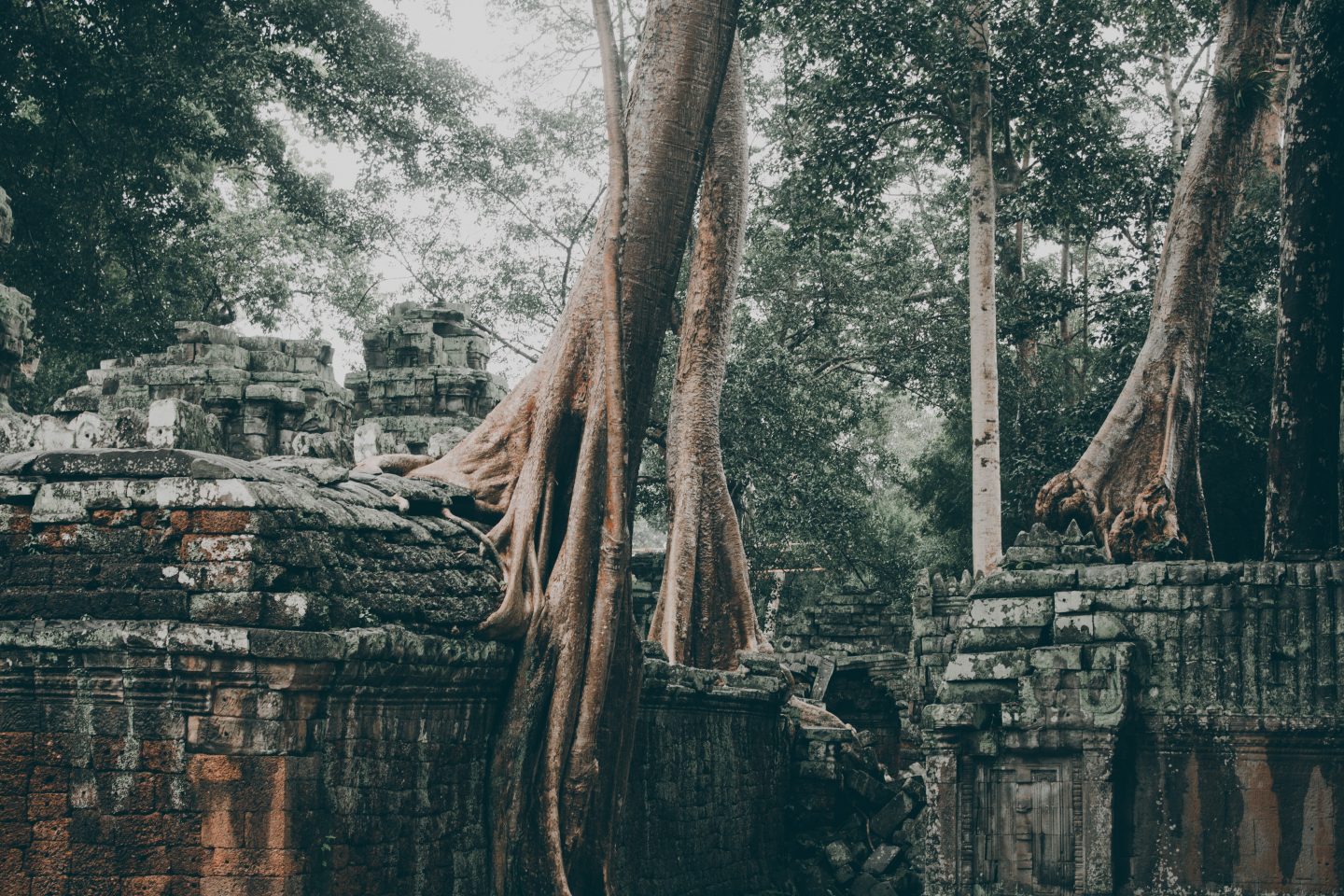 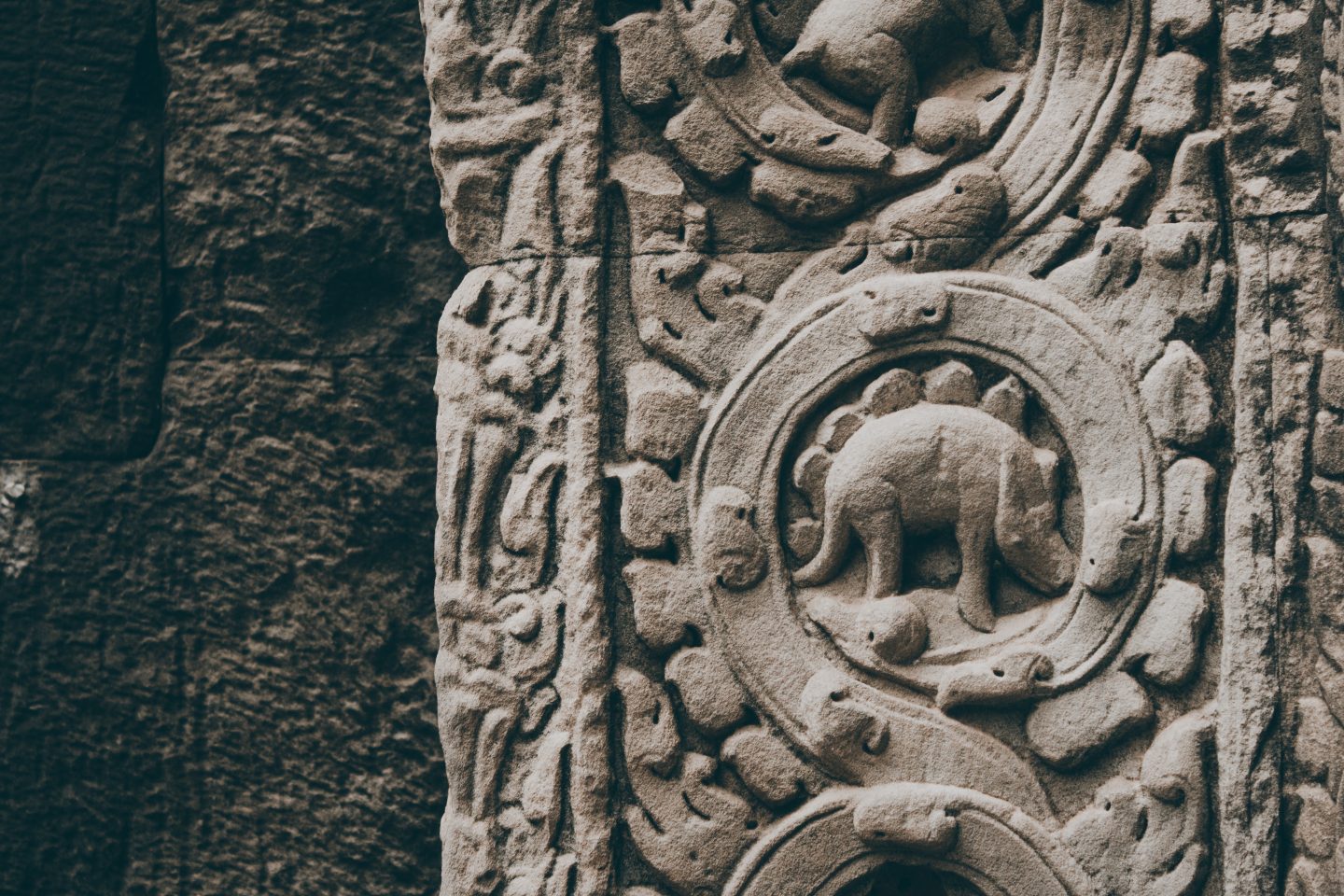 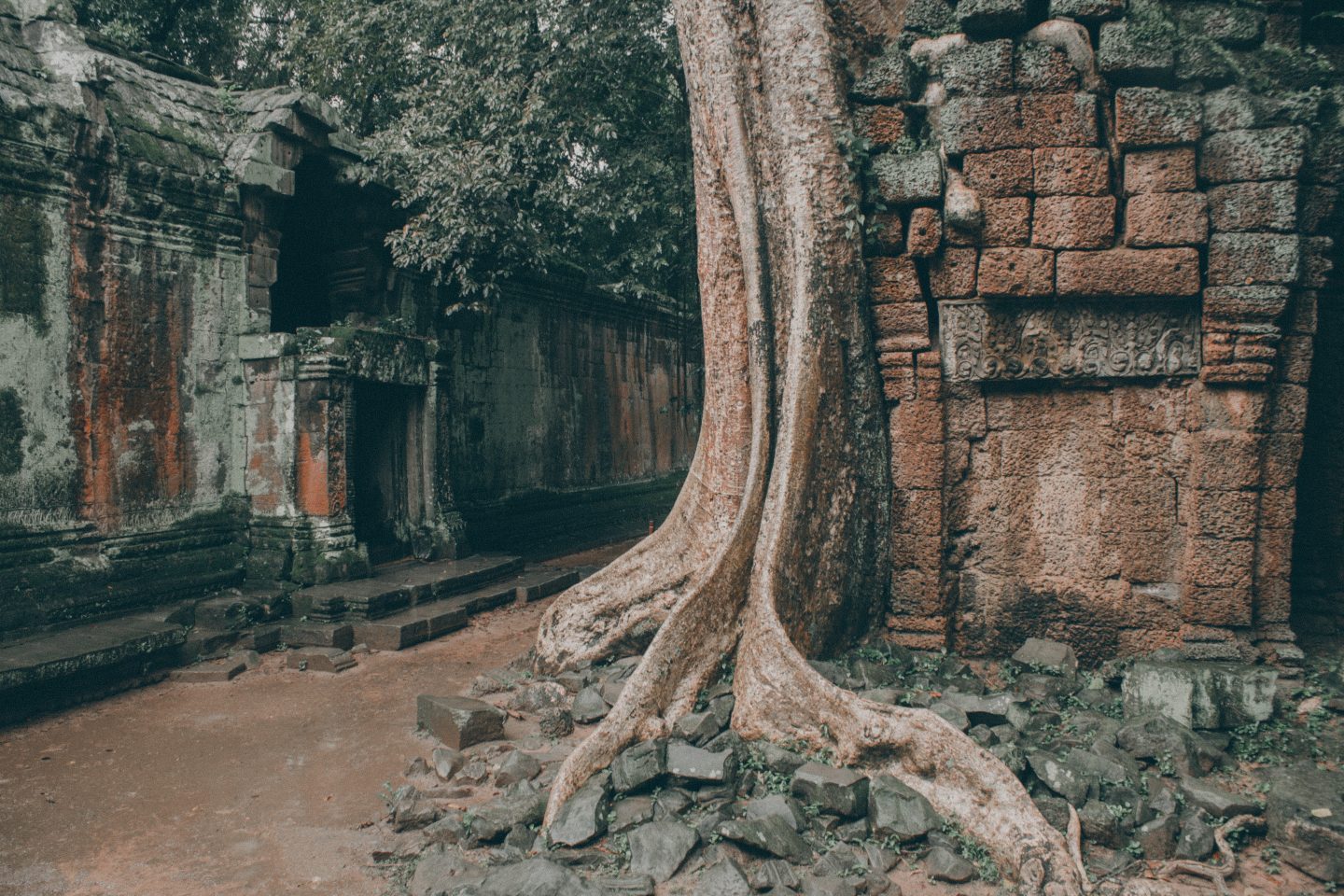 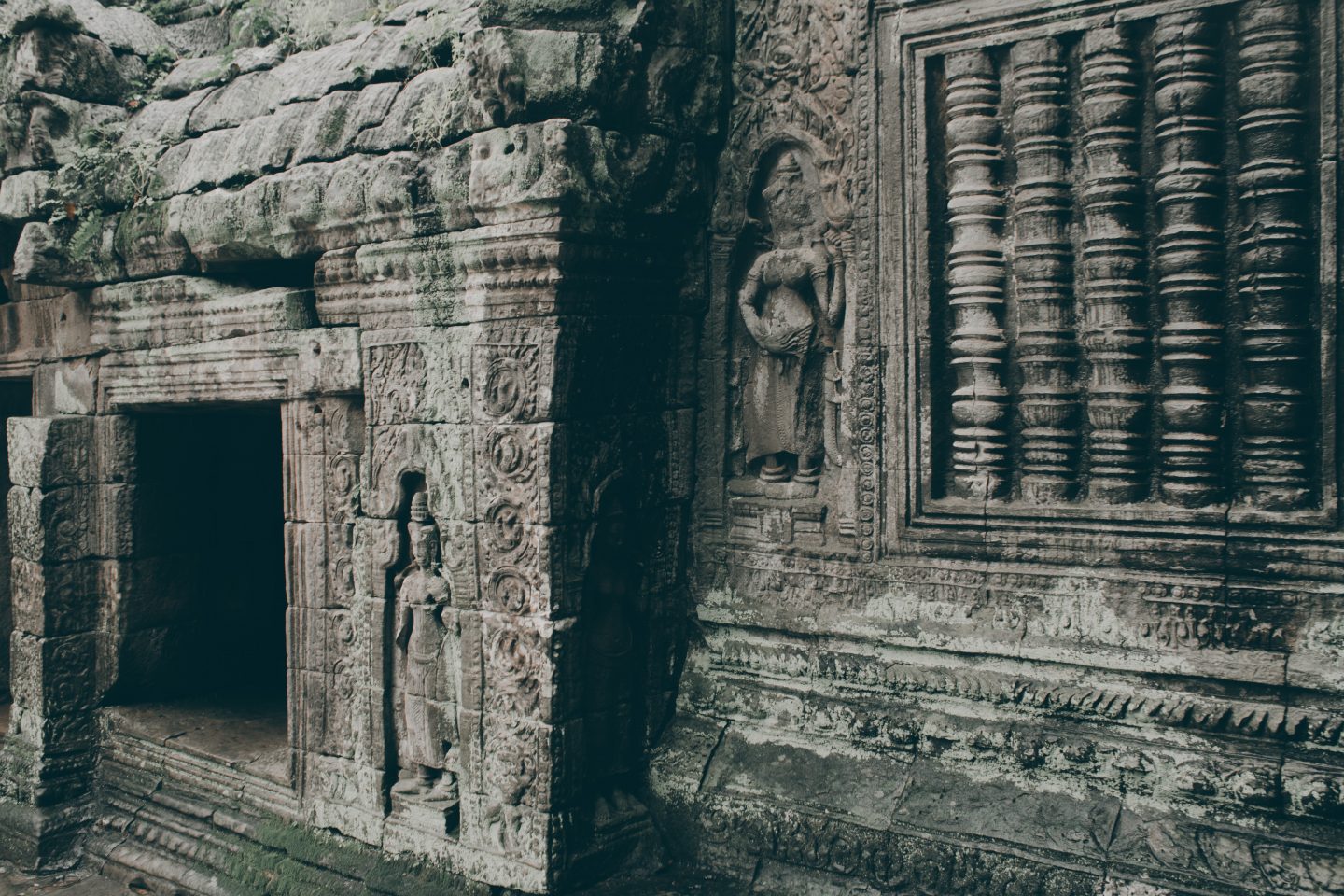 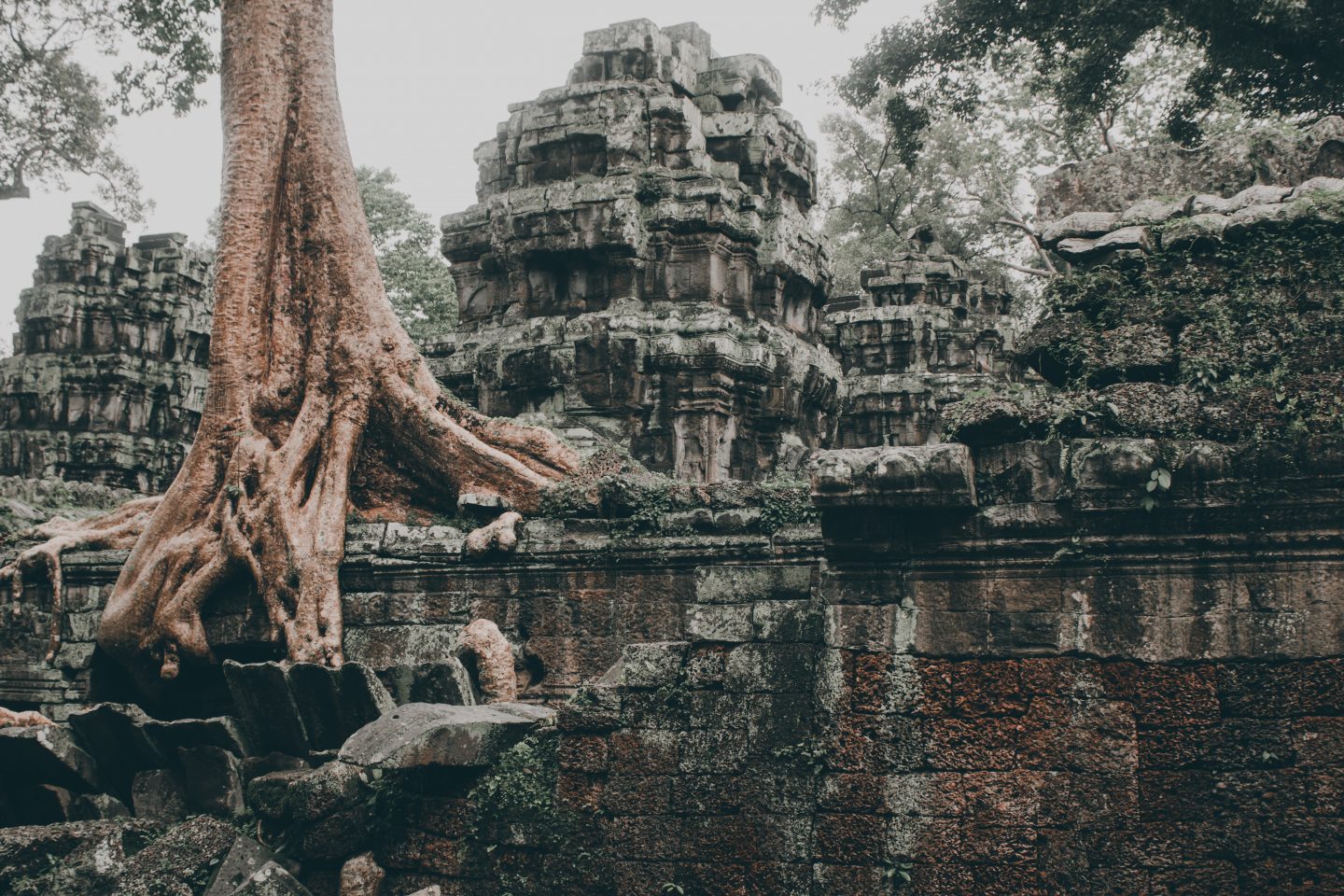 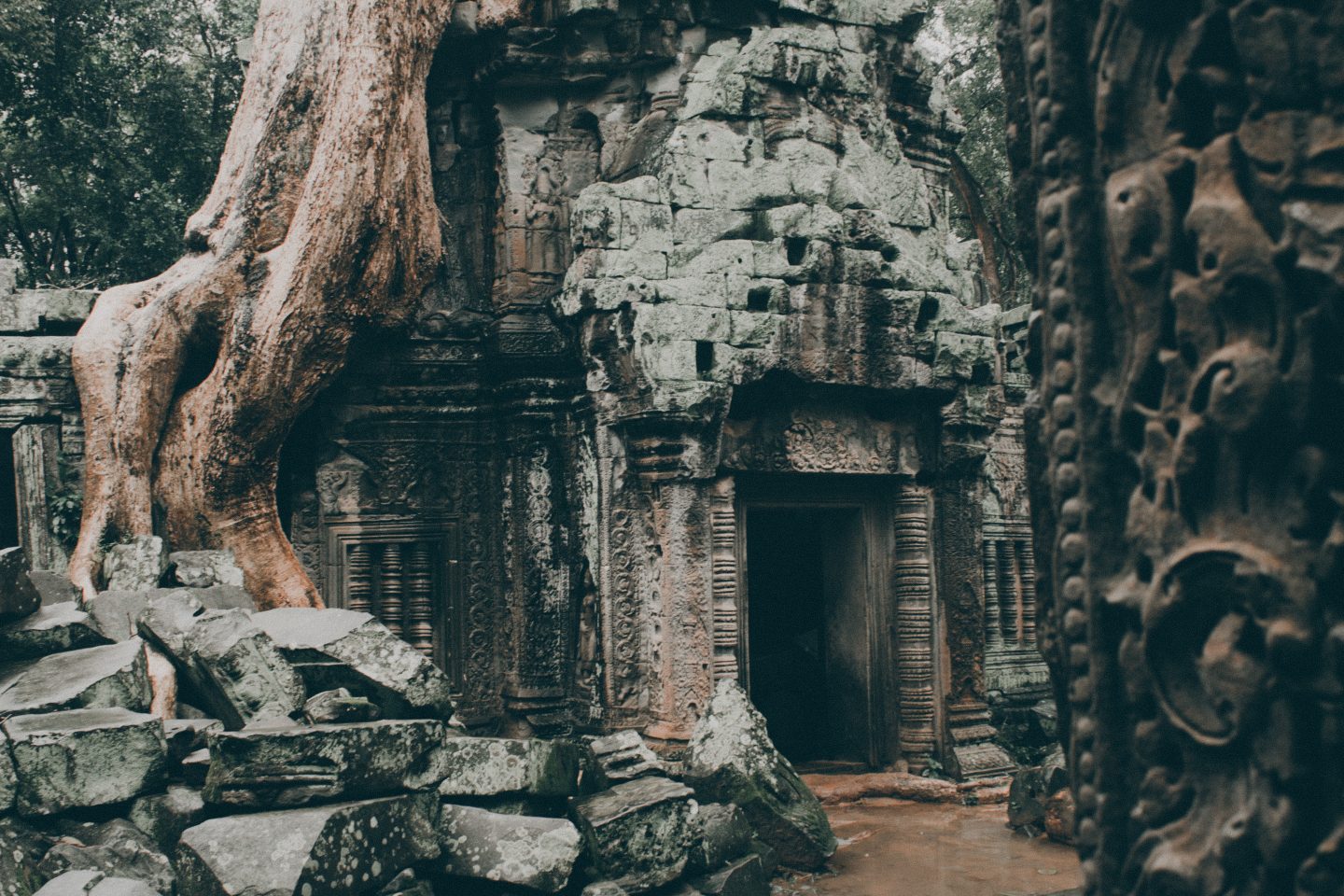 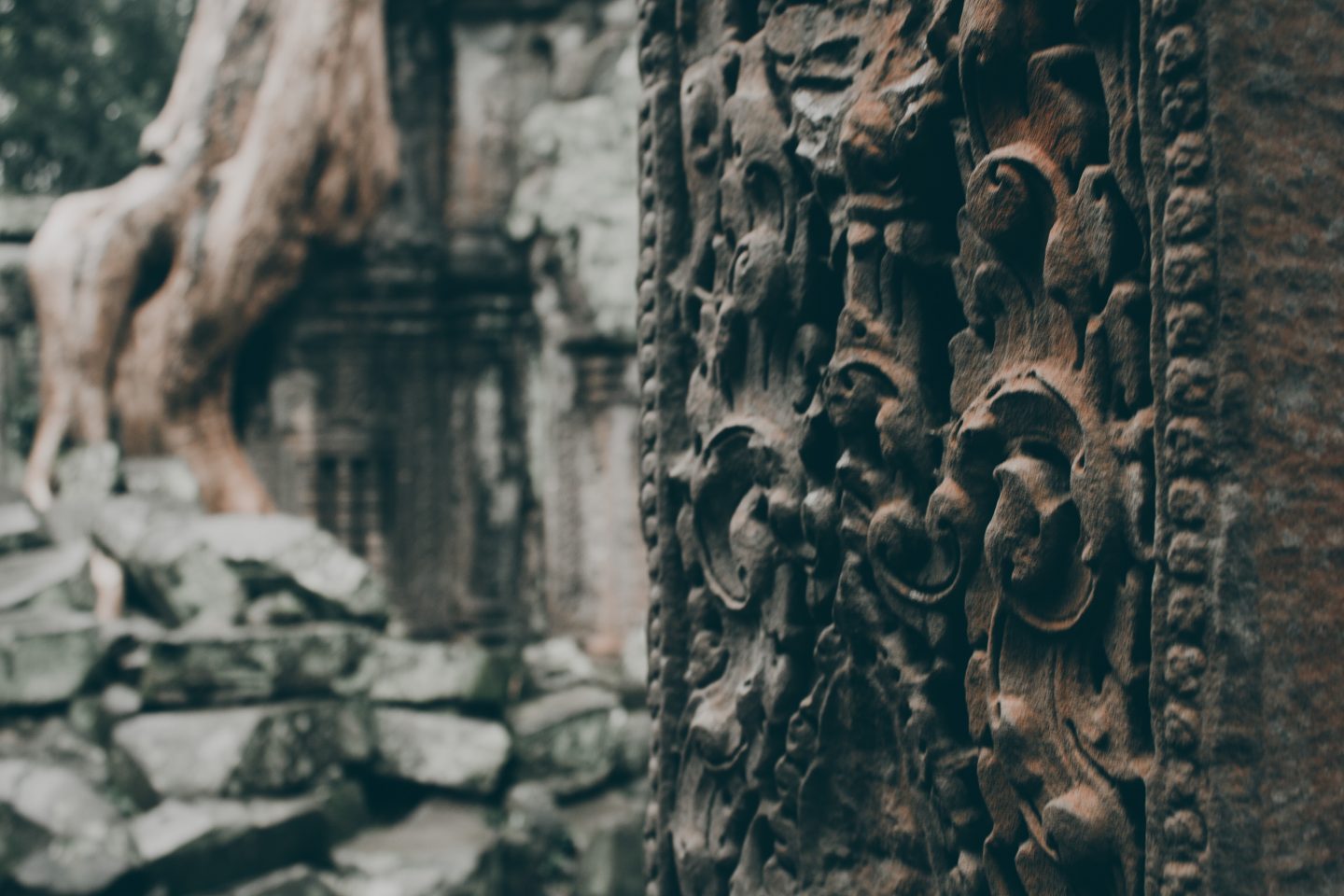 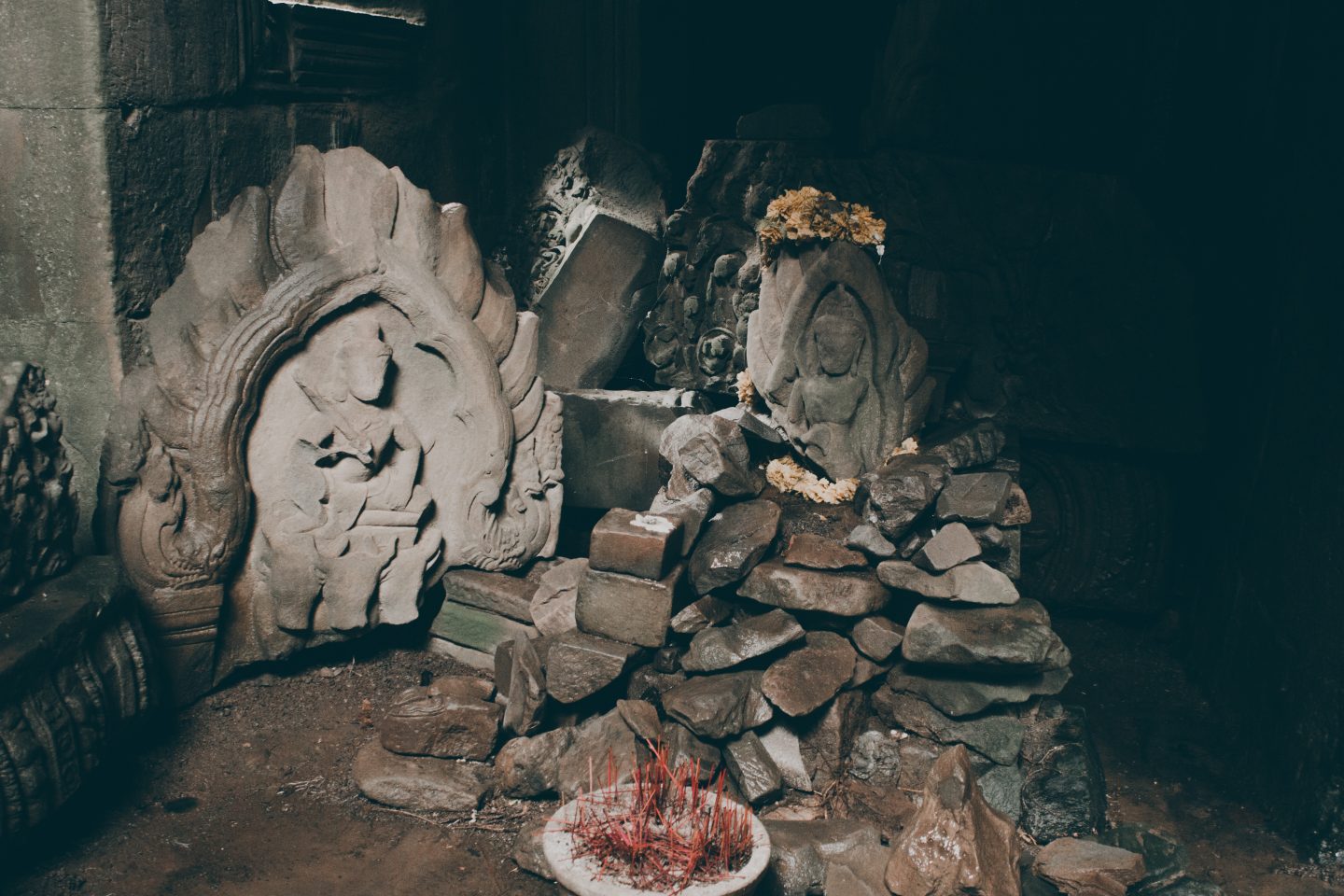 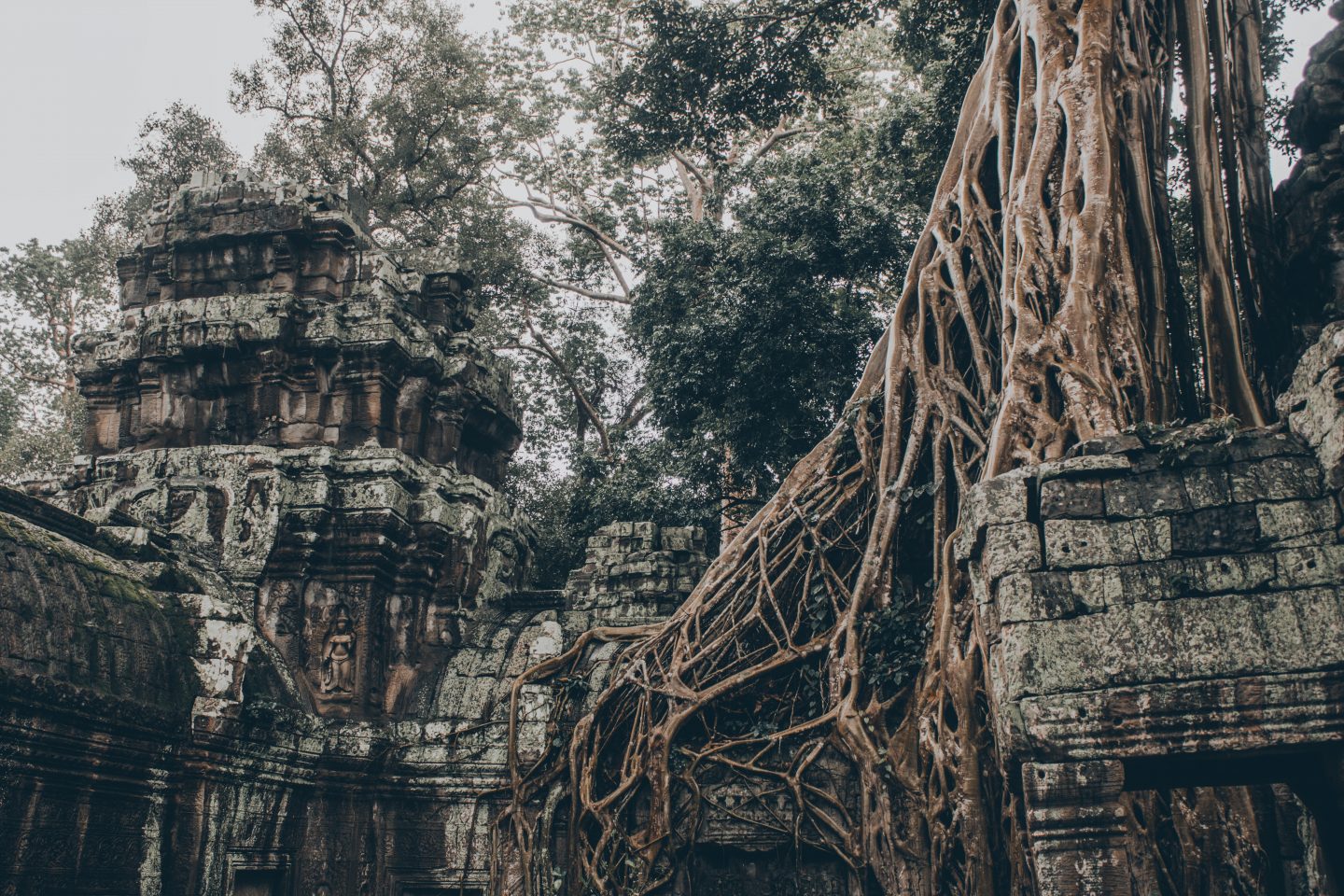 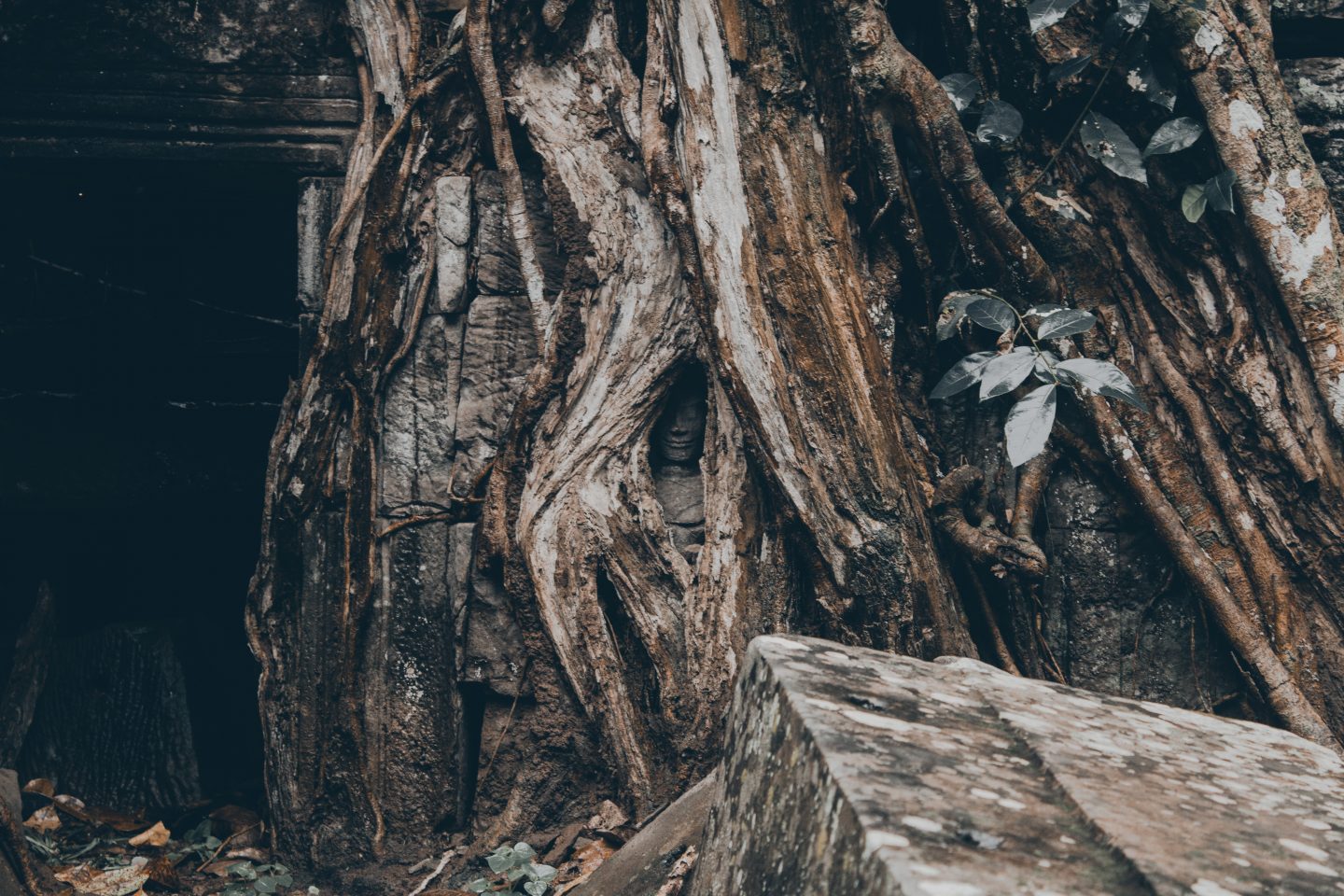 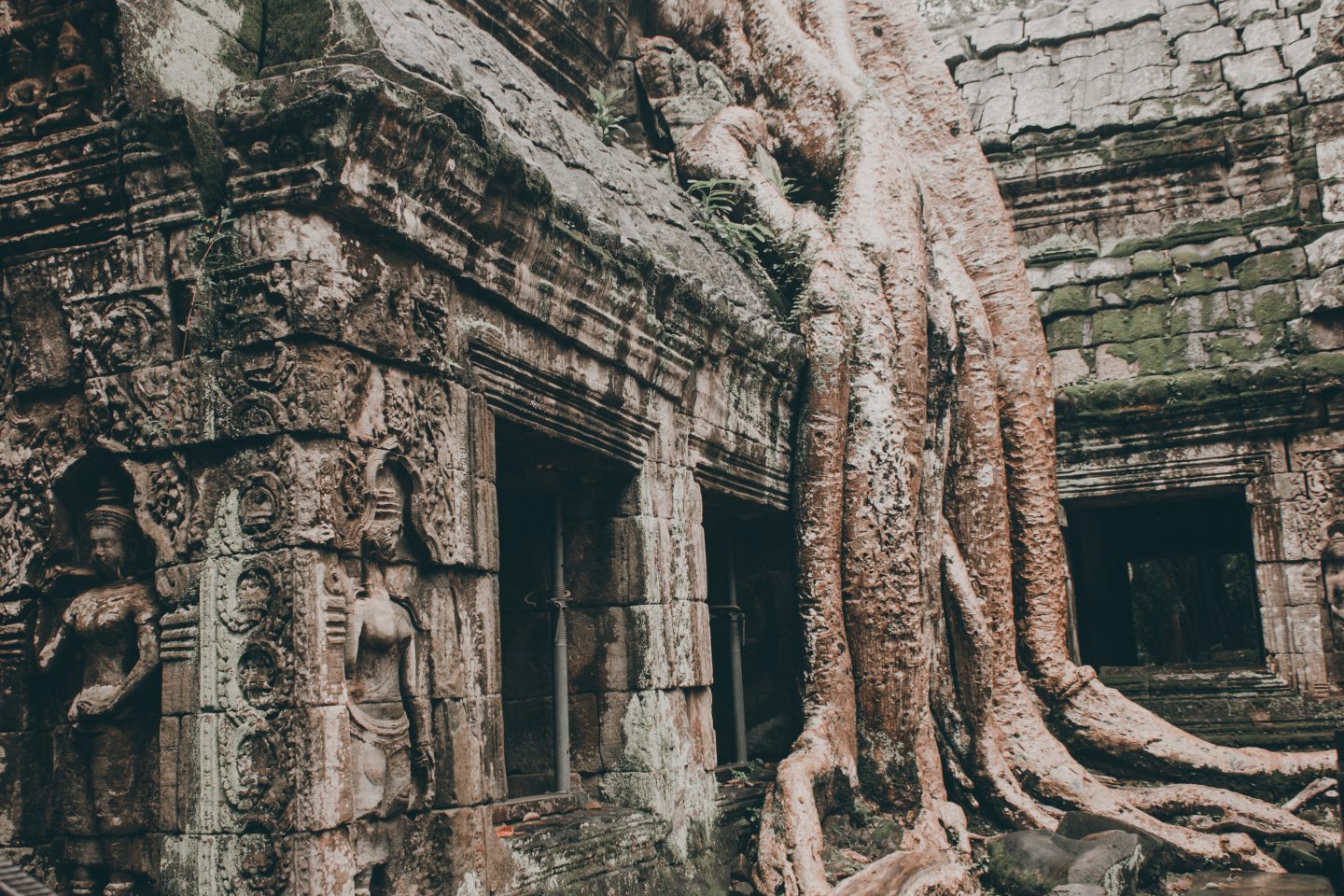 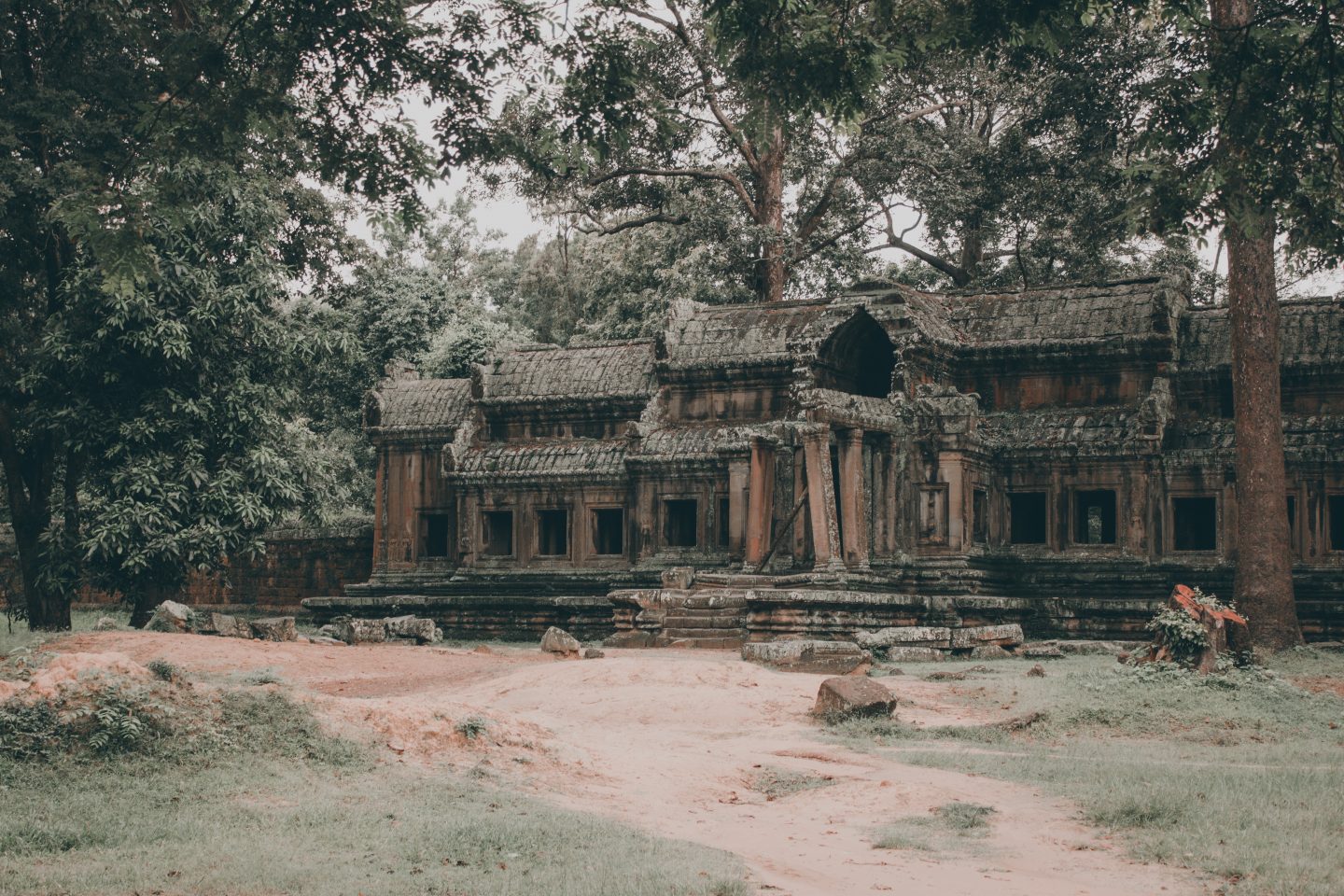 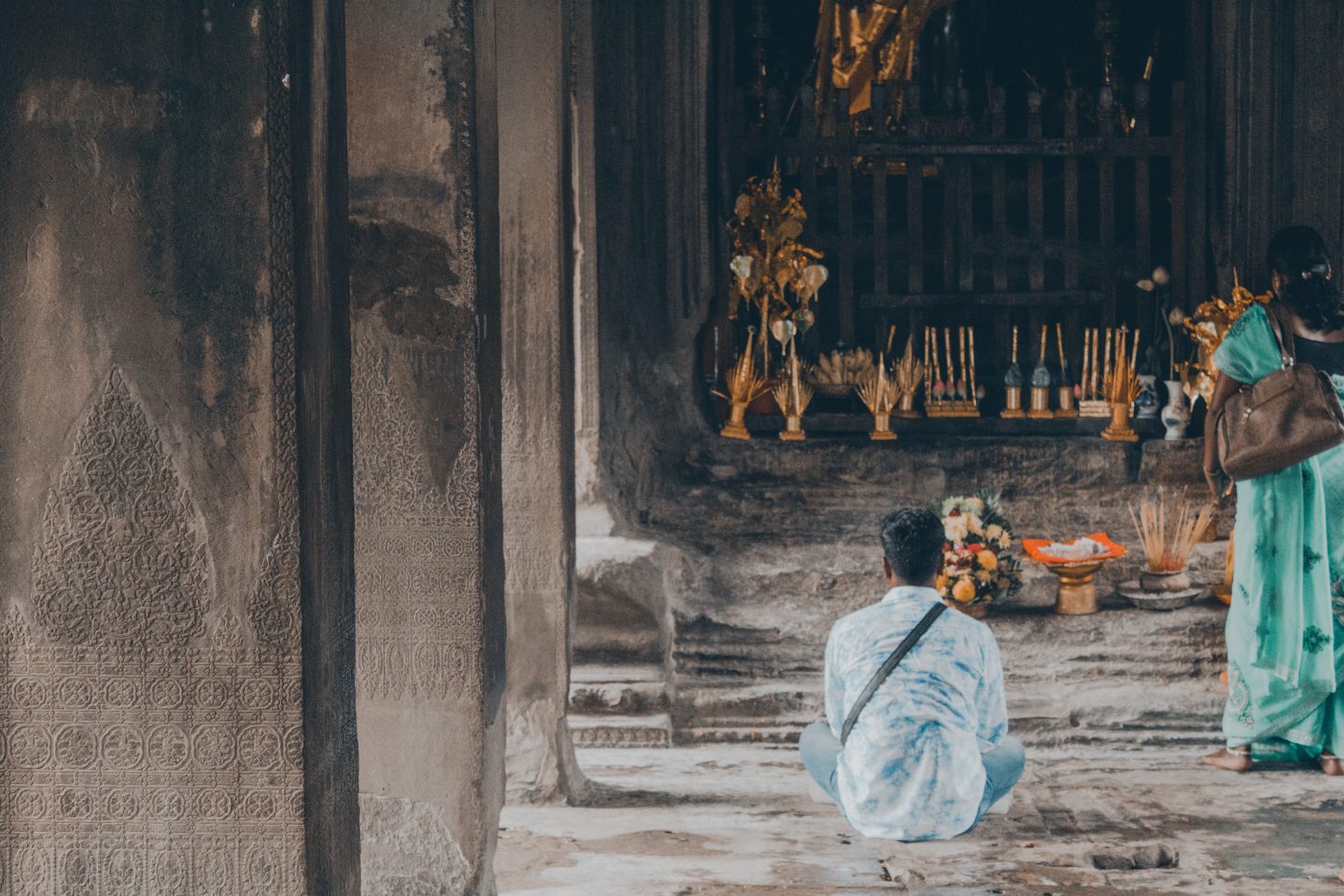 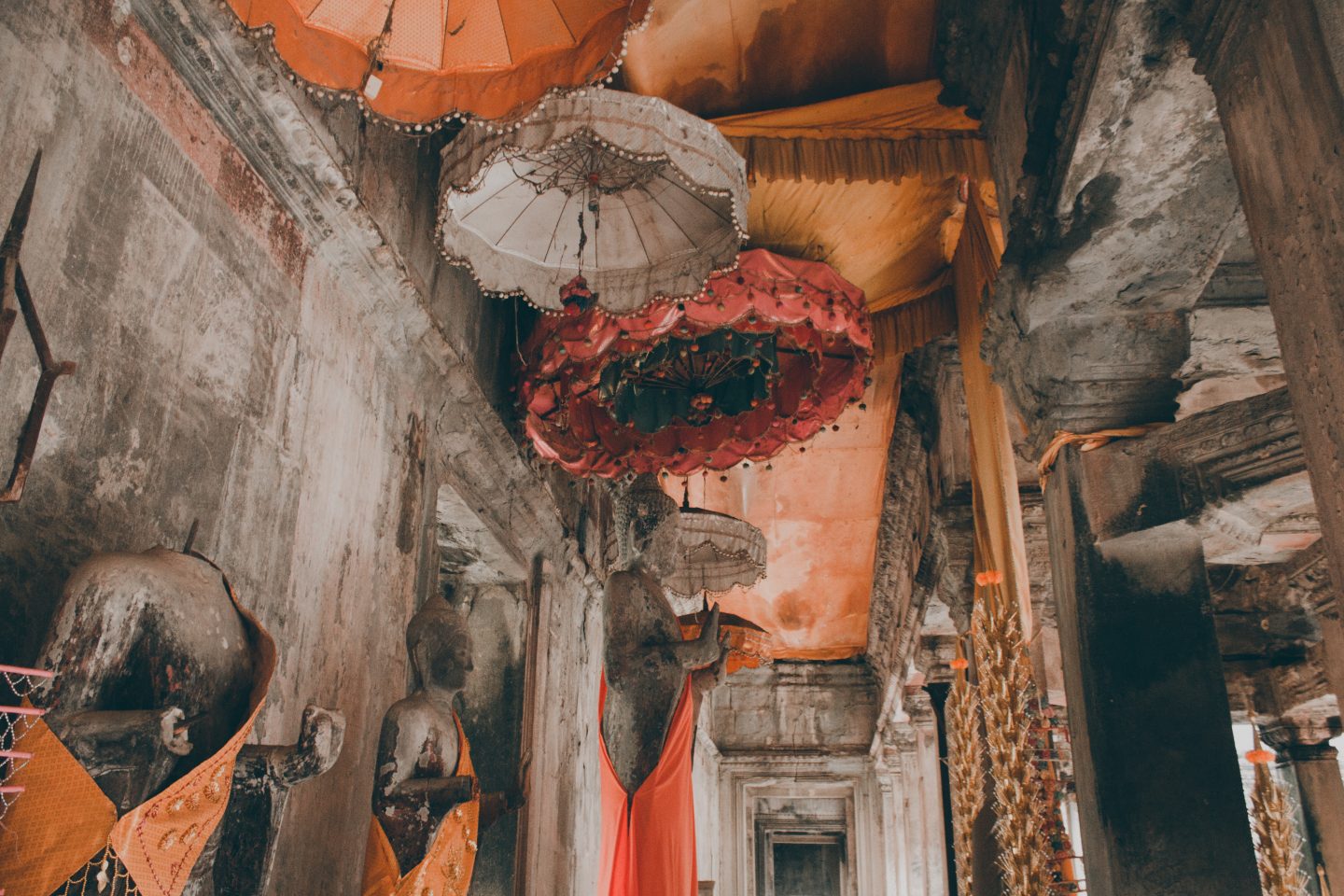 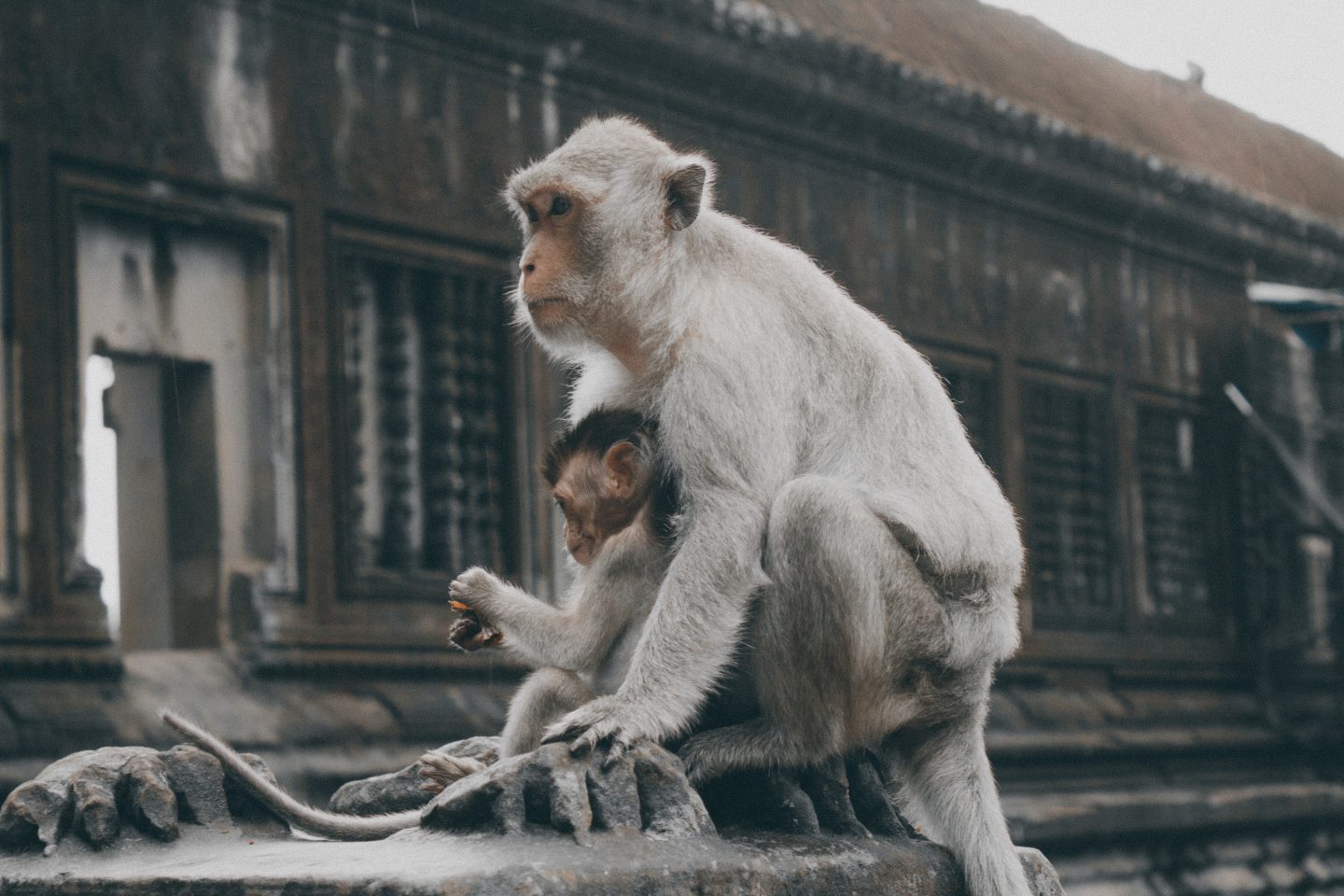