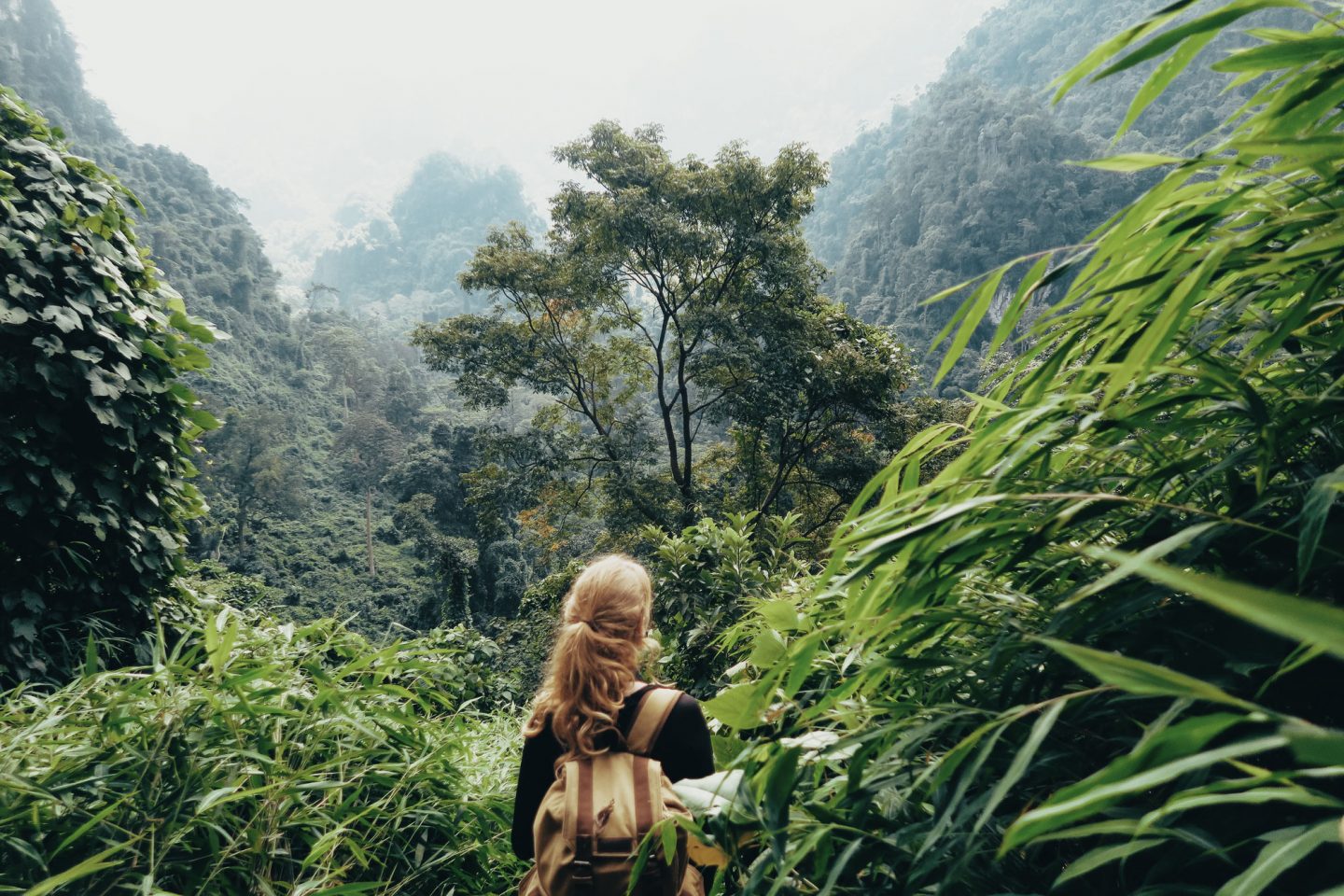 How anyone spends months in the jungle is beyond me. It had only been two days and I felt like I hadn’t seen civilisation for weeks. The jungle is tough, really tough. We were trekking to Pygmy Cave, the 4th largest cave in the world, where we would be camping overnight. The 25km hike would be challenging, both physically and mentally. The Vietnam jungle is hot, humid and full of leeches and spiders. Trees are coated in 4 inch spikes and the terrain is seriously steep. This wasn’t going to be your average Sunday walk.

We met our guide and porters at the company HQ. We’d been instructed to wear long trousers and long sleeves because of the leeches. Even our socks were scrutinised and we were told to put on another pair. The leeches crawl into any crevice they can find, and can even wiggle between the fibres of clothing. The sneaky bastards. I had never seen a leech in my life! The thought of one wriggling it’s way through my clothes to suck my blood was making my skin crawl. I didn’t care about spiders or snakes. Leeches sounded like insidious parasites and I wanted no part in them. Our guide, Bien, gave us a natural spray that would kill them instantly if we found them on us. This simple spray was to be a lifesaver.

Covered head to toe in trekking gear, Ben and I got into a van with Bien and four porters. We drove 45 minutes into the jungle, climbing higher and higher into the limestone crags. The jungle looked like a thick carpet of moss, covering everything in swathes of emerald green. Bien told us that this was a new tour. We happened to be the only ones who booked, so we had the entire trip to ourselves. While it would have been great to meet new people and share the experience with them, it felt special – albeit a little unnerving – to get to experience this wilderness by ourselves. 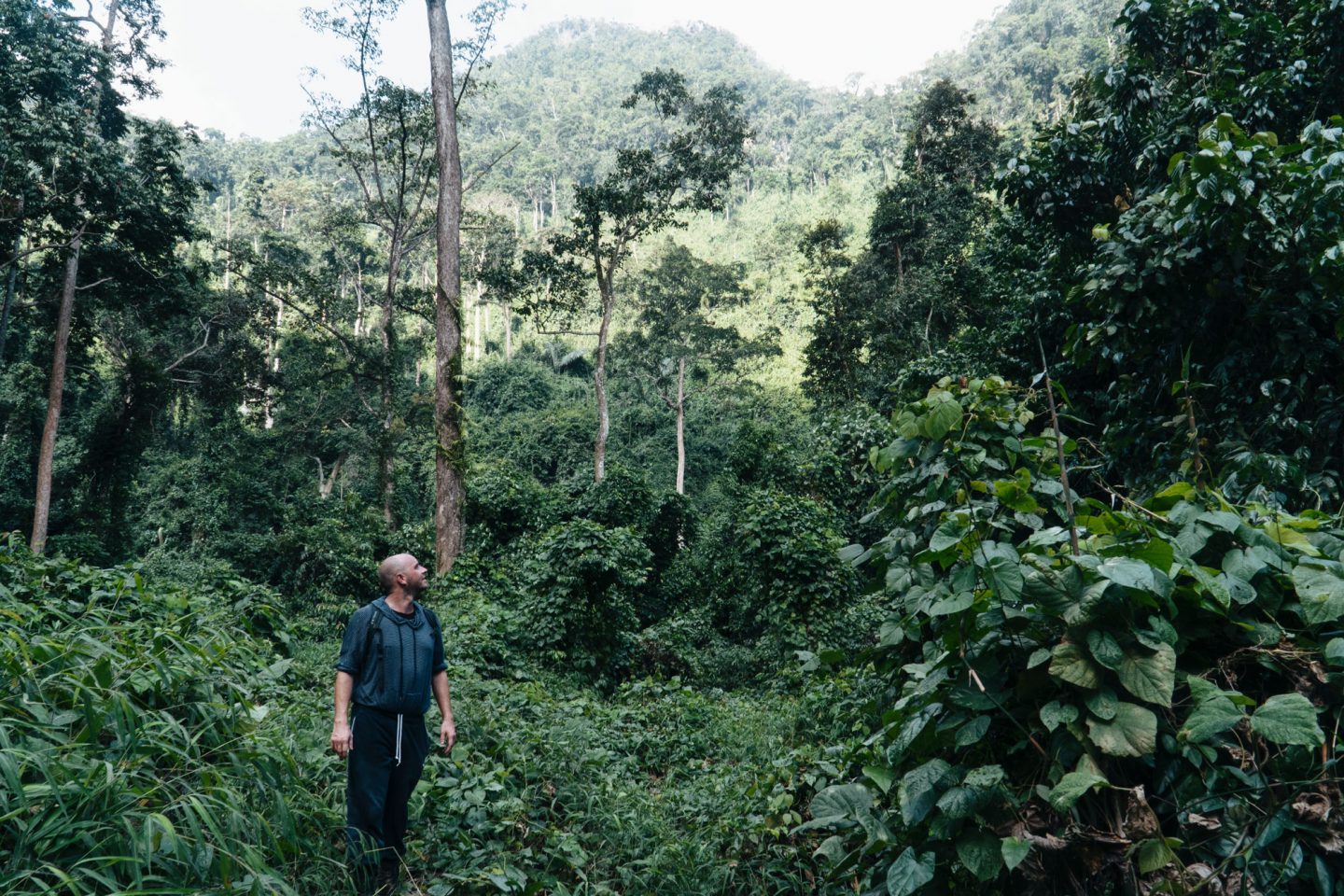 We followed Bien into what looked like the middle of a bush – I could barely see a path. But the trail had begun. Downhill we went, winding between tree roots and jumping over dried streams. ‘Spiky tree!’ Bien would shout from up ahead, warning us to keep an eye out for trees that are covered in thick, dangerous spines. What felt likea mere 3 minutes into the trek, I saw my first leech. Standing on one end, it was thin like a pencil, writhing and twisting upwards as it detected our scent. It was alien-like and utterly horrible. Every 20 minutes we stopped and had a leech check, spraying any that had managed to drop or climb onto our clothes. The jungle soon closed in around us. Bien pointed out boar tracks as we followed the trail, and soon we began climbing upwards.

It was dense and humid. Thick green leaves pushed their way into my face and the steep ascent was arduous. Clambering over big boulders we inched our way upwards, one step at a time. Legs burning and covered in sweat, I tried to make sense of where we were. It’s much easier to appreciate the jungle when you’re looking at it from the outside. To be in it, trying to navigate through it, it becomes a whole different beast. You really can’t see the jungle for the trees. Crickets and cicadas serenaded us and sunlight beamed through the canopy when it could find space. The path was not really a path but a certain route that Bien and the porters knew like the back of their hand. They took sharp turns when it seemed like we should be going straight. Then he’d spot a small break in the leaves just big enough for a person to slip through and take us through there. It was truly wild. 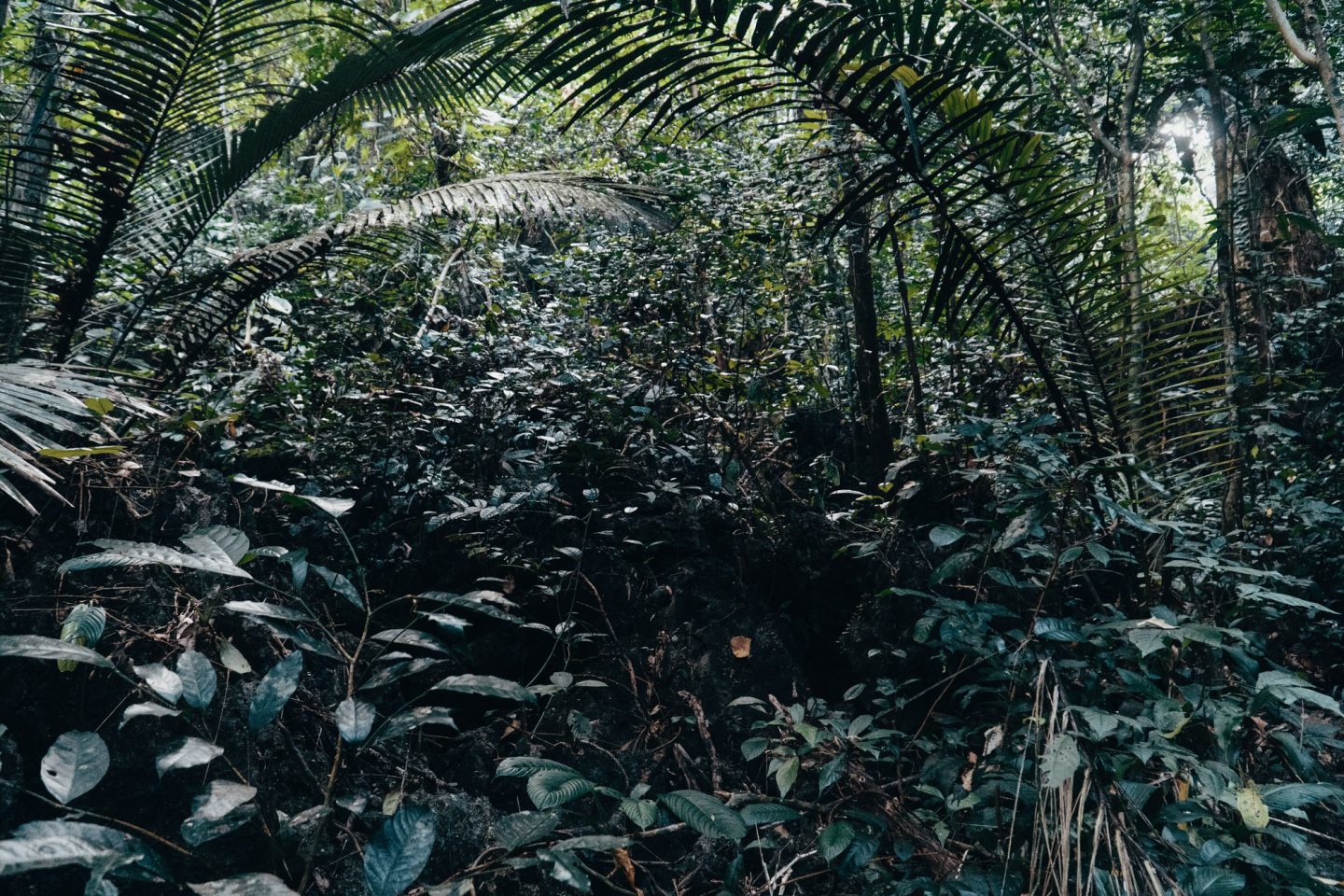 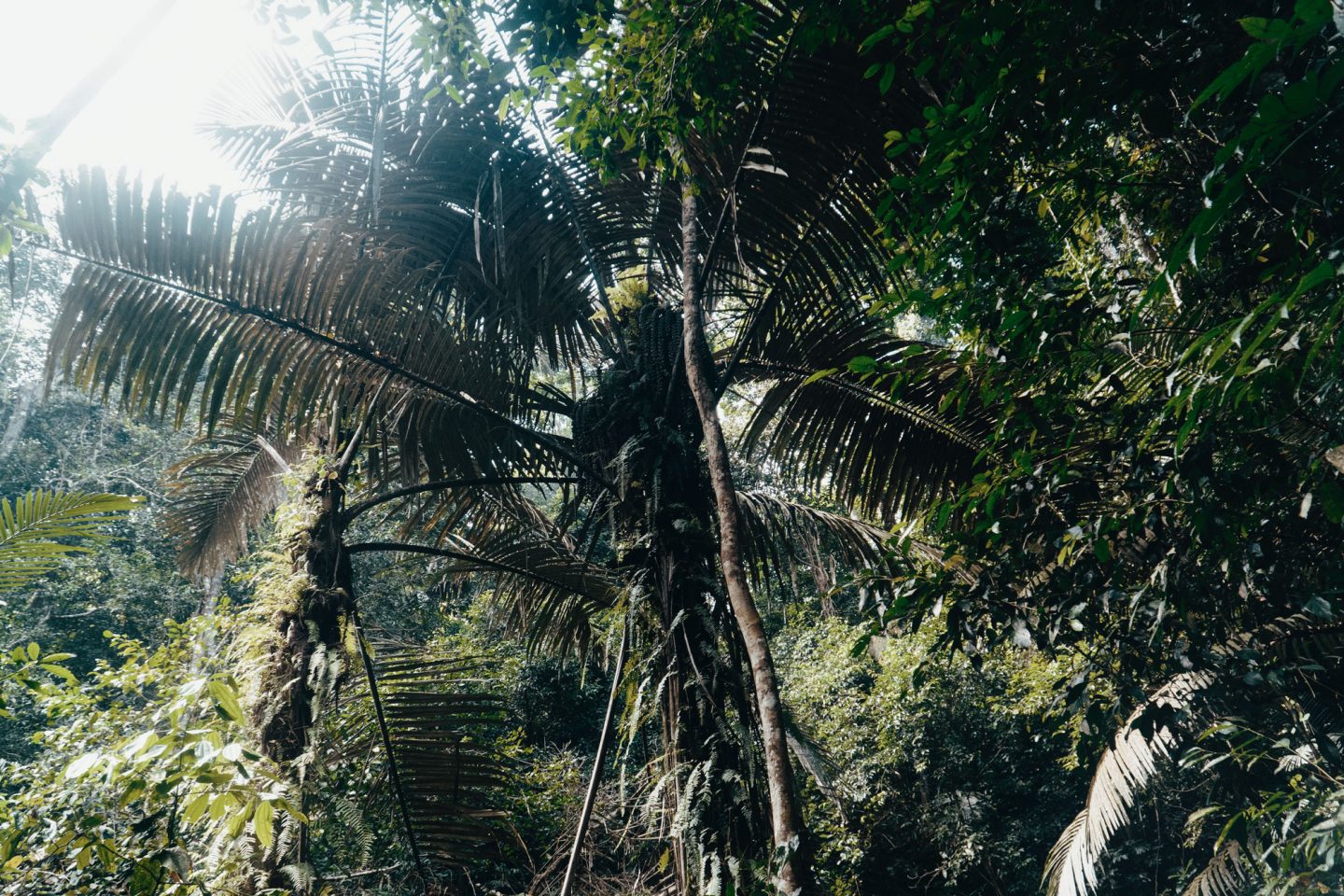 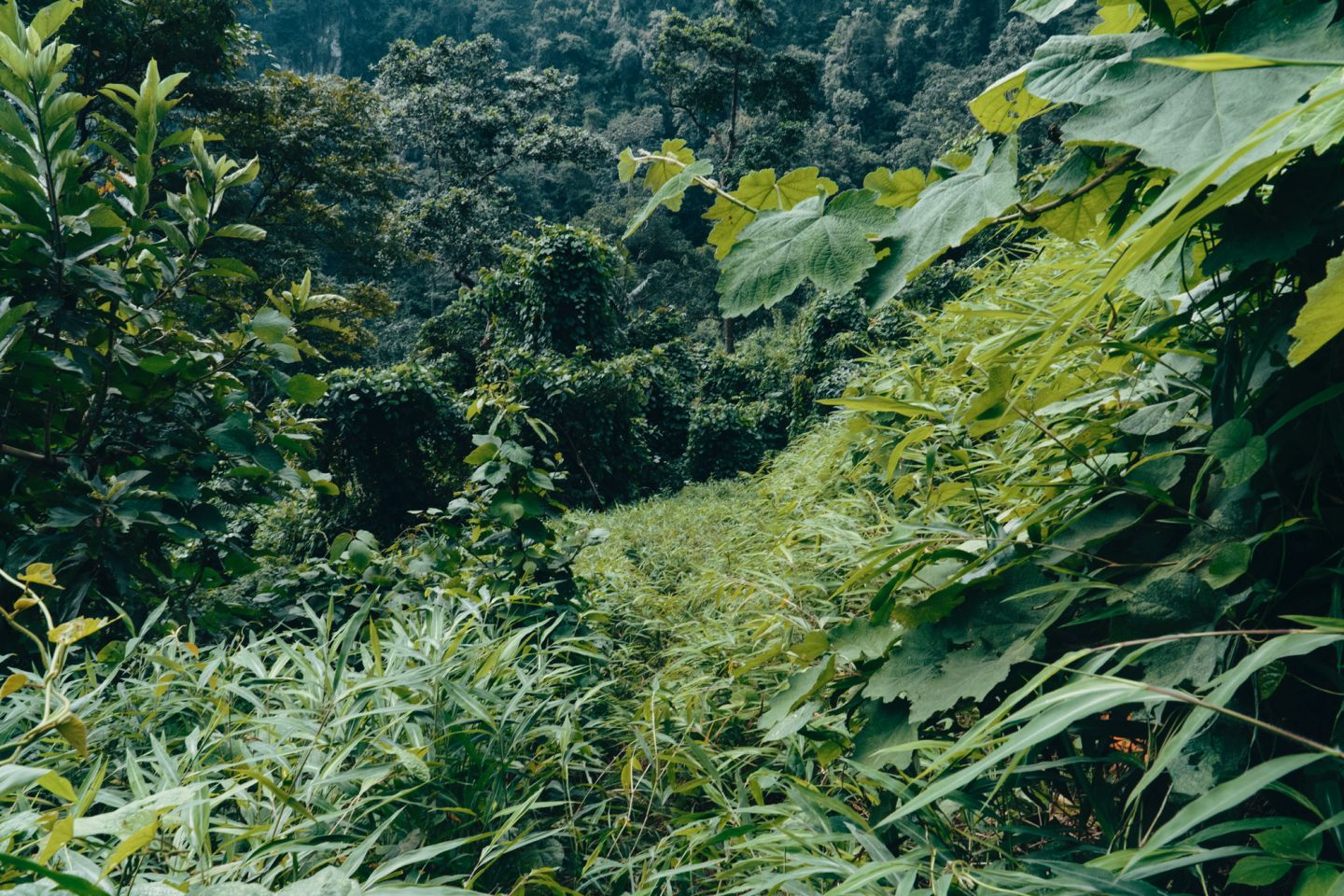 We stopped for lunch when we reached a look out point. We had ascended to the peak of a limestone crag and the jungle simply dropped beneath our feet. Jungle-clad pinnacles stretched out of the forest in front of us, disappearing into a horizon of green. It was breathtaking. We’d barely rested when we were back on our feet, this time going downhill. Very downhill. The almost vertical descent had us picking our way over rocks and fallen logs. Vines made handy ropes as we made our way down the other side of the mountain. Focus became the name of the game, and everything else disappeared as we concentrated on what was in front of us. All I saw for the next two hours were my hands and my feet as we navigated the jungle. Then out of nowhere, we emerged to a chasm in the earth – Pygmy Cave. The jungle disappeared into the black cave mouth. It was enormous. ‘This is where we’ll sleep tonight?’ I asked Bien, not quite believing it. ‘Yes, this is where you’ll sleep tonight’. He pointed to a flat area at the cave entrance, where the jungle ceased and sandy cave floor began. ‘Just there’. 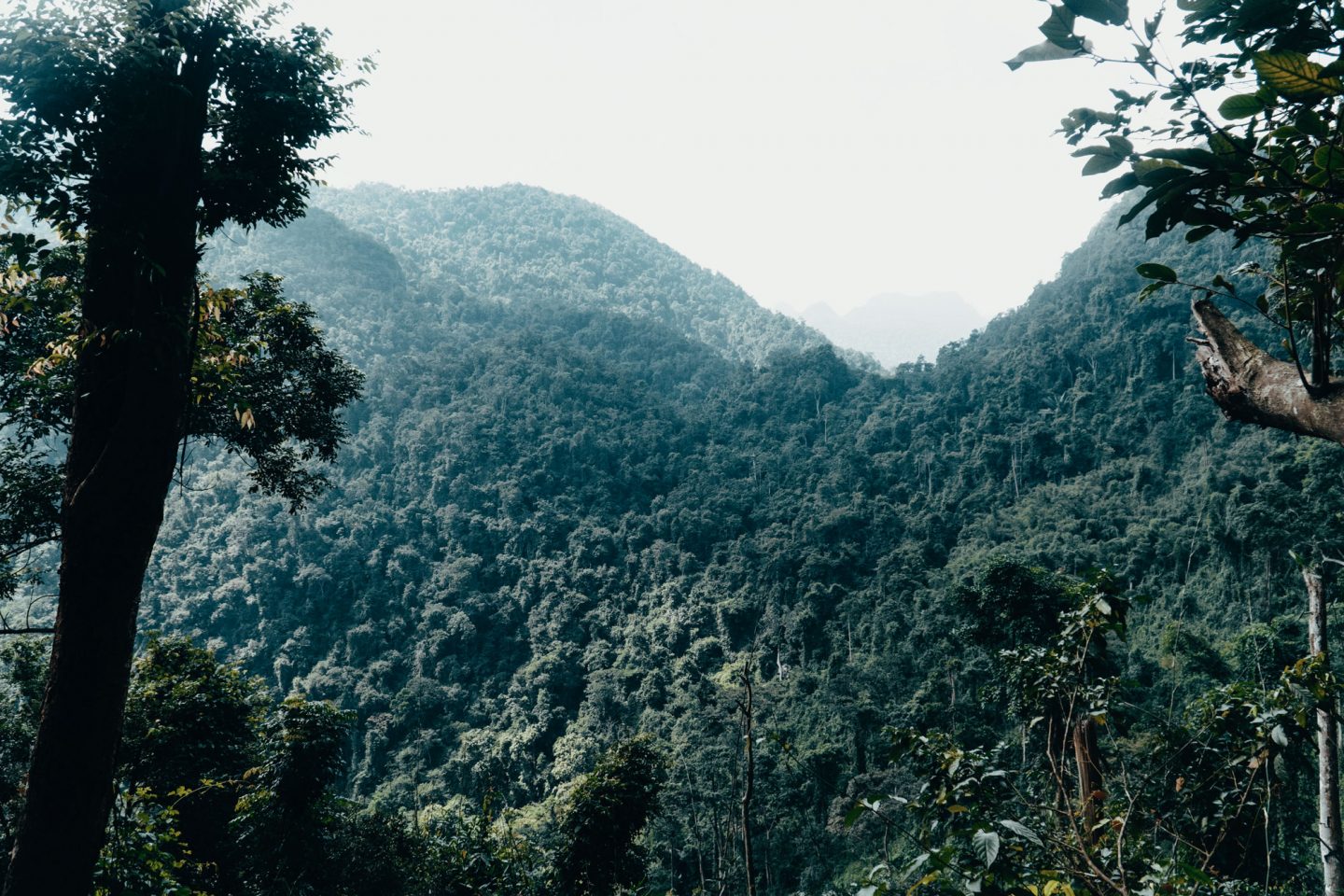 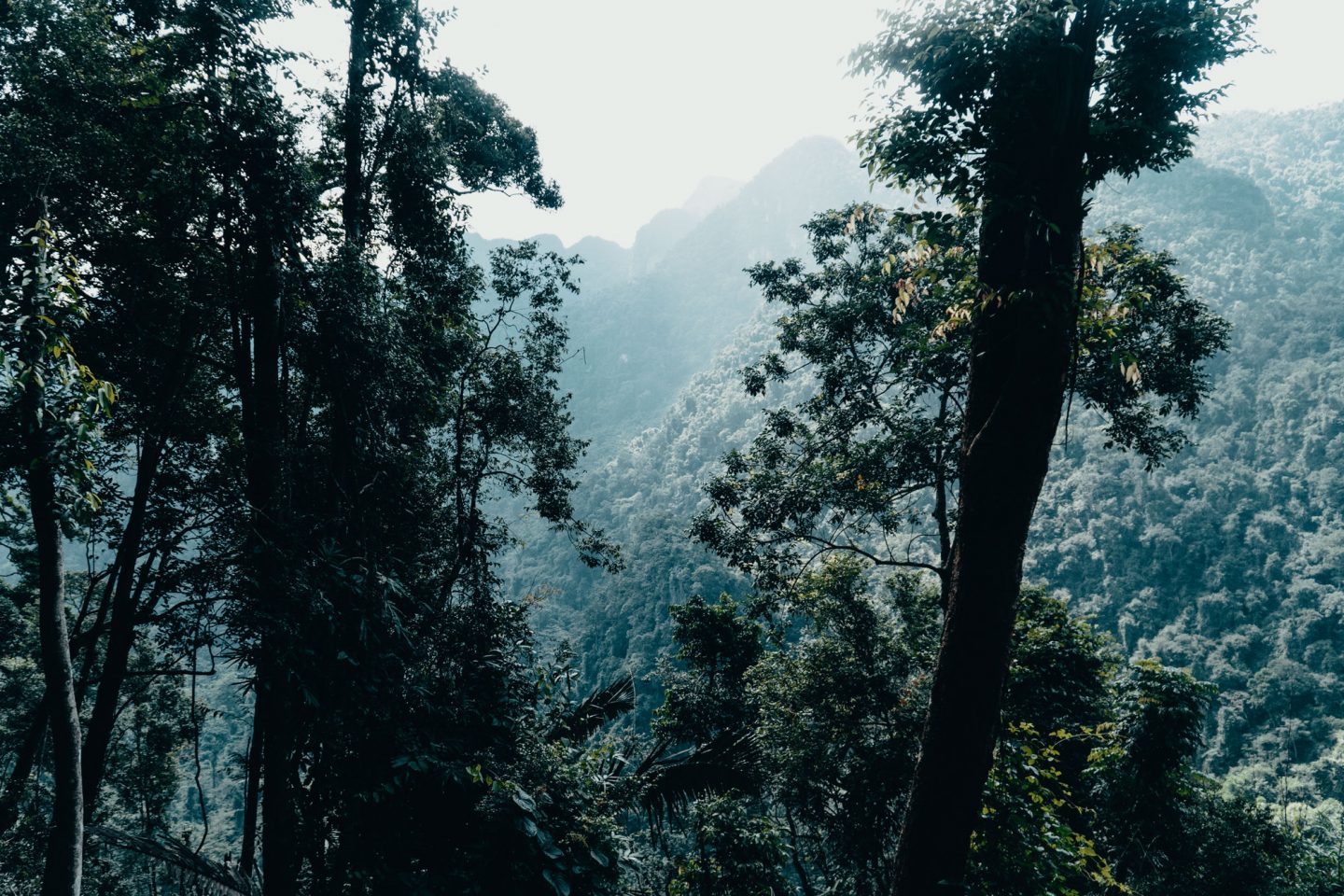 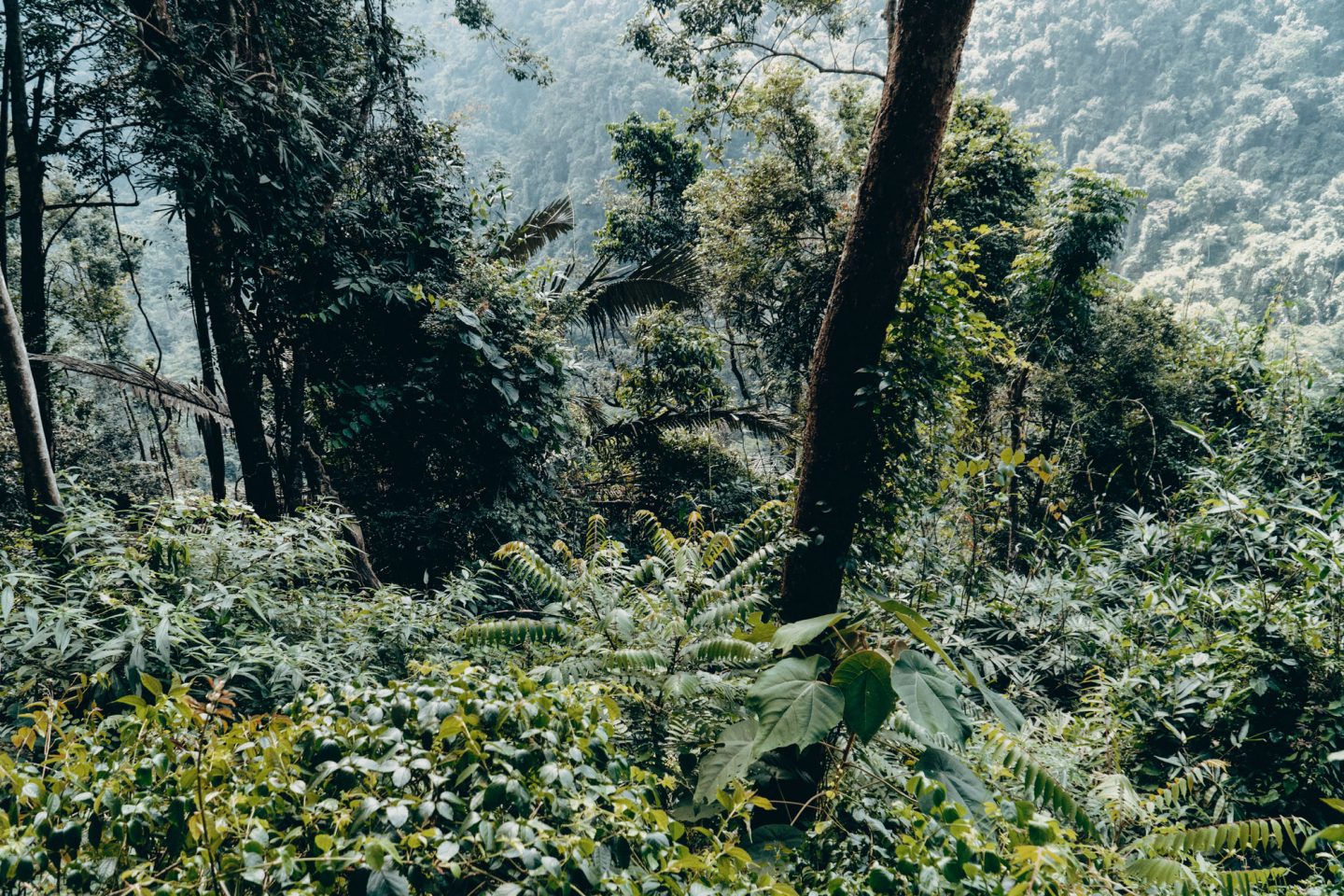 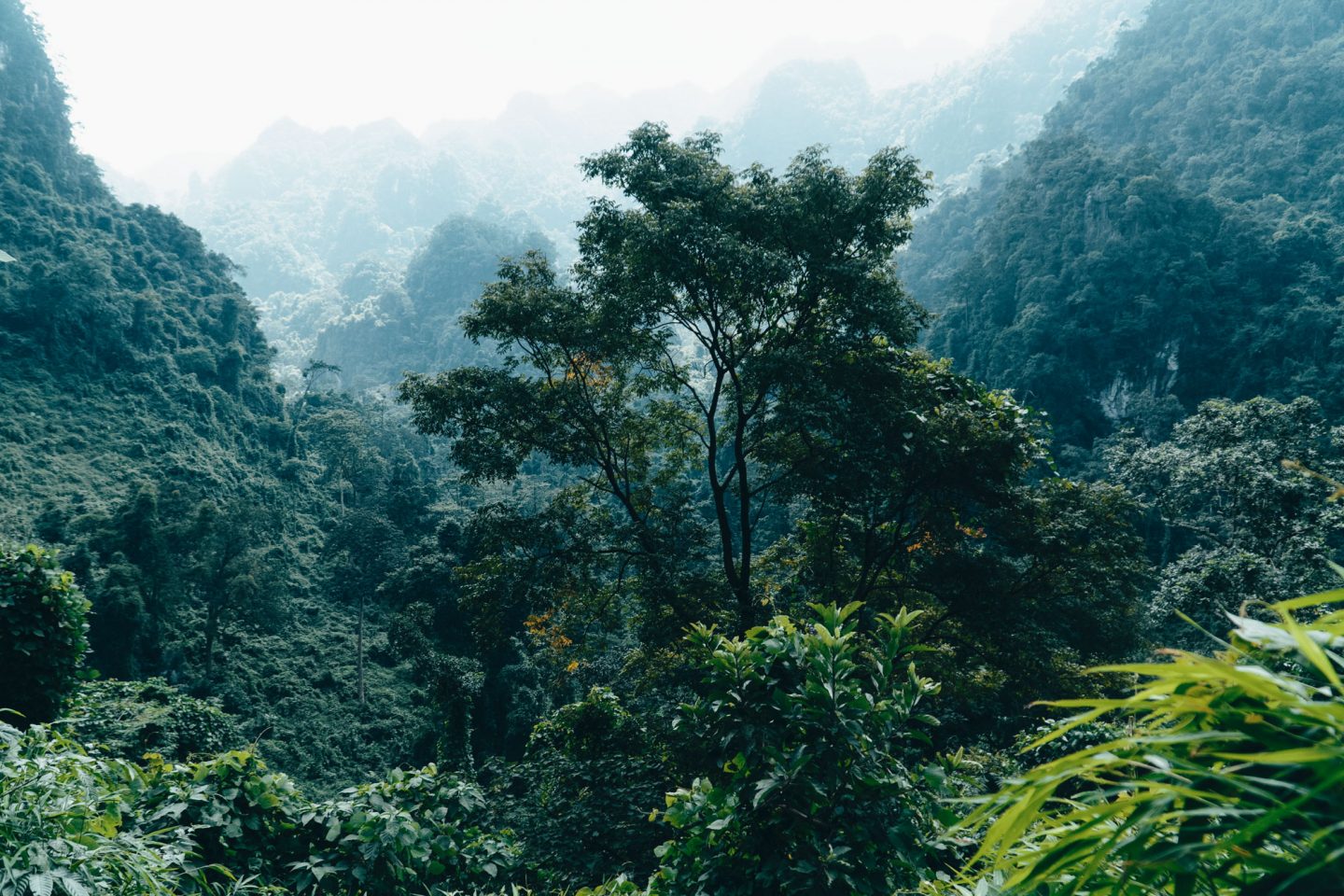 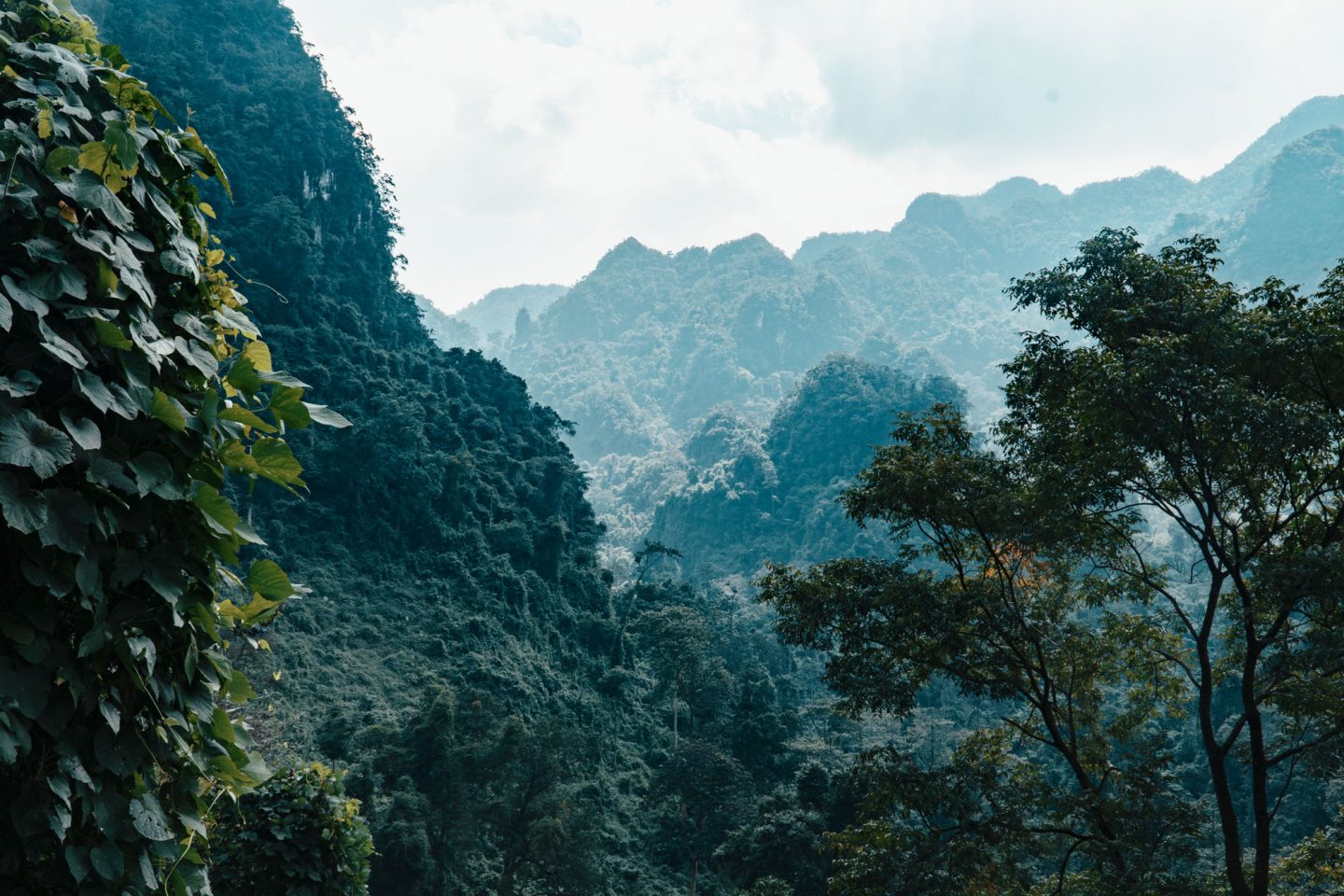 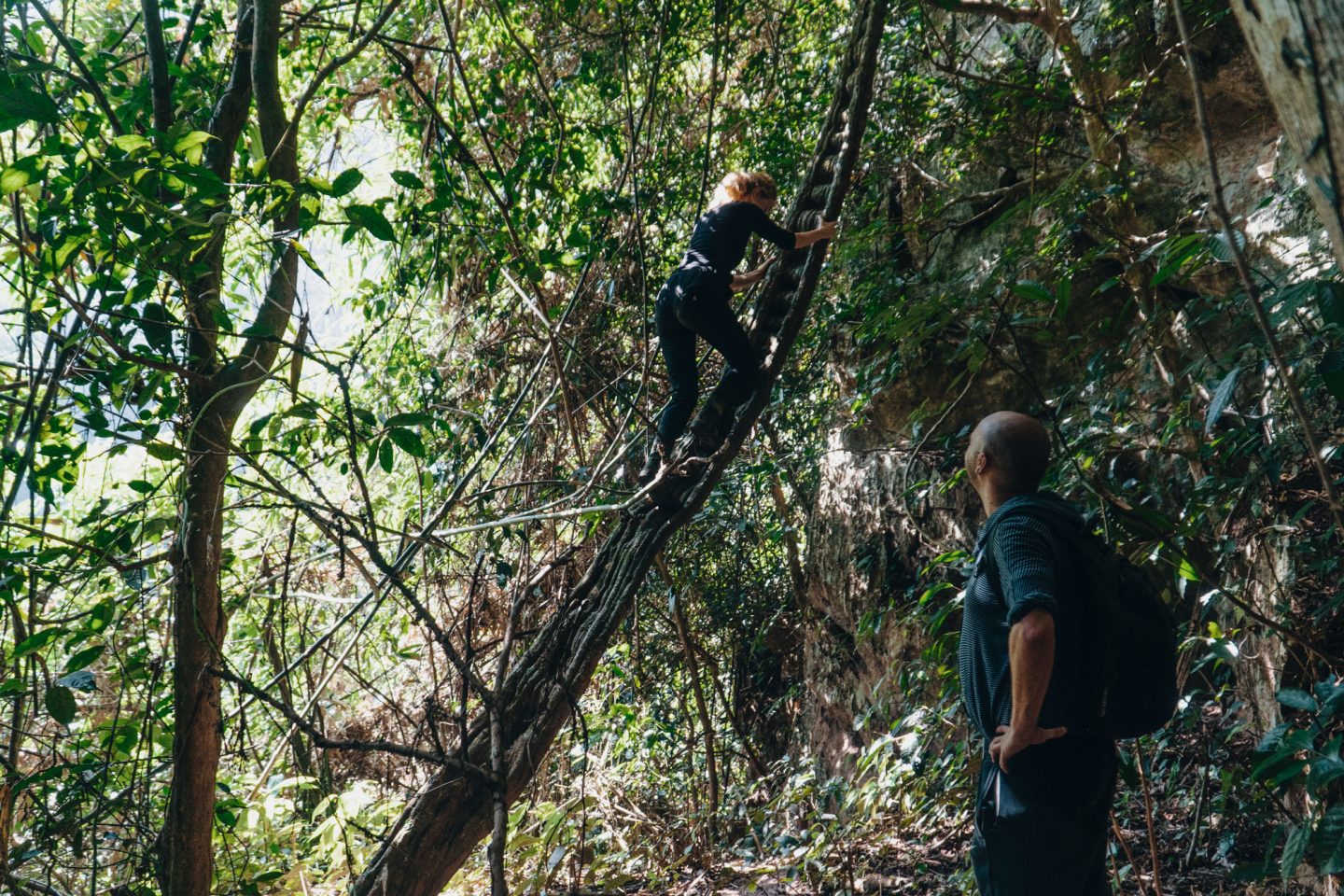 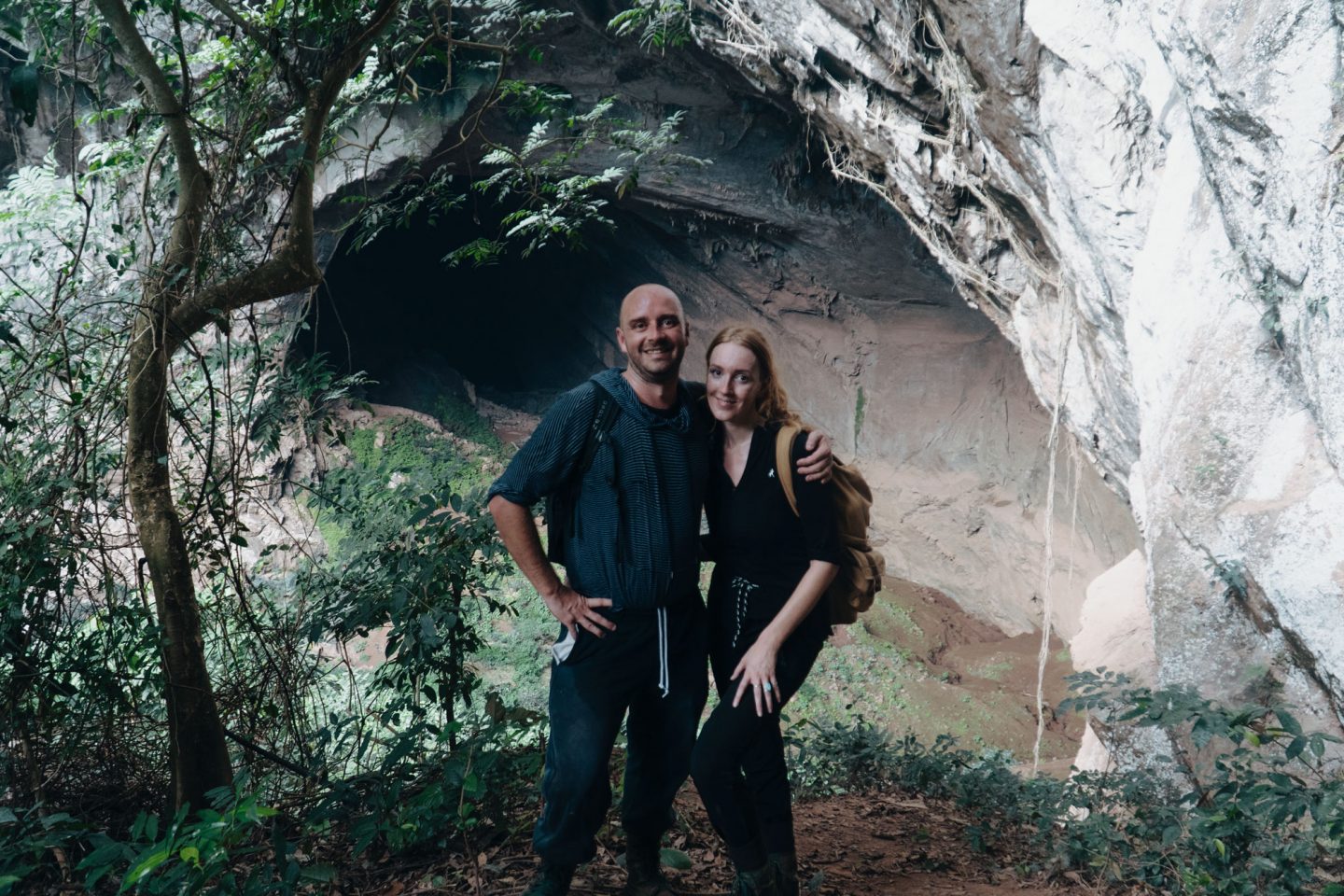